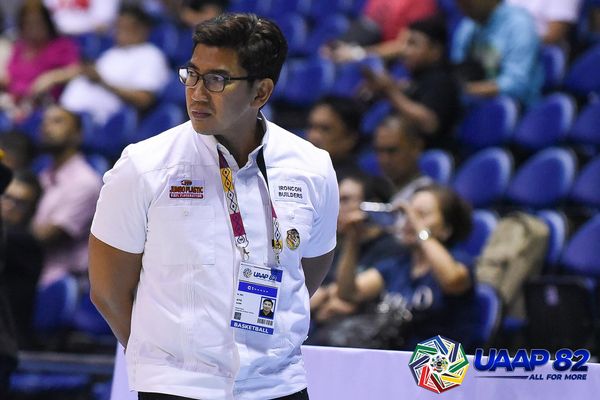 WHAT will the UAAP do with the ball?

The league has yet to confirm or deny whether University of Santo Tomas has formally endorsed the appeal of former coach Aldin Ayo to the UAAP Board of Trustees to reconsider his indefinite suspension.

UST has also not yet issued an official statement confirming that it is backing the appeal of Ayo.

The Varsitarian, the school’s official student publication, reported last Oct. 7 that a high-ranking official who requested anonymity has supported Ayo’s appeal after the Sorsogon City PNP and the provincial government last Oct. 2 cleared Ayo of any liability in the alleged training bubble in his hometown in Capuy from mid-June to August.

The ban handed by the Board of Trustees, composed of university presidents, was based on the findings of the UST fact-finding committee’s probe.

The son of former University of the East star and PBA Rookie of the Year awardee Jimmy, Manansala was tapped as UST juniors’ coach just last July, but he resigned as one of Ayo’s assistant coaches along with McJour Luib in the face of the Sorsogon bubble controversy.
Luib will take over the Tiger Cubs coaching job.

Manansala suited up for UST under the late great Aric Del Rosario from 1999-2003 before opting to try his hand at coaching. He guided St. Clare College of Caloocan to a ‘four-peat’ in the NAASCU.

Ayo, who will turn 43 on Thursday, resigned at the helm of the Tigers last Sept. 4 and was suspended from all league events and activities last Sept. 9.

The Sorsogon City PNP and Gov. Francis “Chiz” Escudero ruled out Ayo, a former three-term councilor of the city, from having made any violation, saying UST secured all the necessary documents before going to Capuy, declaring that they are not persons under monitoring (PUMs), did not have any COVID-19 symptoms for 14 days, were tested seven days prior to the trip, and secured all the necessary travel pass from the Joint Task Force COVID Shield.

A 14-day mandatory home quarantine was also put in place before the team went on a “personal development farm training,” that was certified by the Capuy barangay captain, the PNP memorandum added.

In his sworn statement, Ayo said his players engaged mainly in farm work in exchange for allowance, free meals, and free lodging.

The players “were allowed to make use of a basketball court which is enclosed inside the living room of (Ayo’s) house where the players had individual training and not team practice,” the report said.

Ayo is likely not yet off the hook.

The Commission on Higher Education has issued a show cause order to UST for violating its advisories that “prohibited mass gatherings such as ceremonies and school activities, until the IATF prohibition is lifted,” last Sept. 7.

The ill-fated UST bubble was burst after former skipper CJ Cansino said he was booted out of the squad due to “defiance of authority” last Aug. 21.