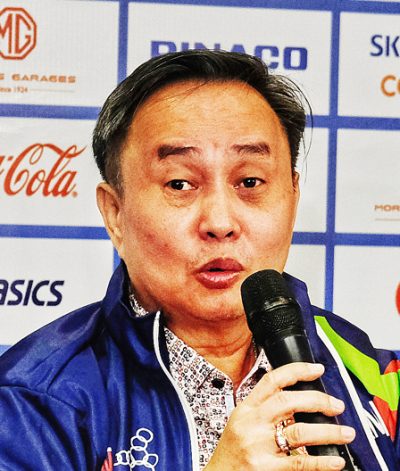 PHILIPPINE Olympic Committee president Bambol Tolentino announced yesterday that he would abide by the POC constitution and by-laws mandating the election of a new set of POC leaders in November.

He actually took over the remainder of the term of Association of Boxing Alliances in the Philippines president Ricky Vargas who resigned, citing business and personal reasons. Vargas beat erstwhile POC chief Jose Cojuangco Jr. 24-15 for the post on Feb. 23, 2018.

Under Article 7, Section 2 of the POC charter the election is scheduled for “the last Friday of November in the year of the Olympic Games for a term of four years beginning January 1 of the following year or until their successors shall have been duly elected and qualified.”

In the event an Olympics is not held during its scheduled year, the POC general assembly nevertheless “shall meet on the last Friday of November in the year on which the Olympic Games was supposed to have been held, for the purpose of electing officers for the ensuing four years,” the statute states.

Tolentino said he was more concerned about the status of the next Southeast Asian Games to be held in Vietnam in 2021 after the Vietnamese hosts slashed by half the budget set for the games.

“Siyempre kapag hinati mo ‘yung budget then some of the sports and events will also be cut. So I am worried about that development,” said the POC president, who added he will lobby for the retention of dance sport, arrnis, obstacle course and kick boxing.

These sports disciplines were gold mines for Team Philippines that reclaimed the overall championship in the 30th Southeast Asian Games last December with a glittering haul of 149 gold, 117 silver and 121 medals.

“We hope to lobby for these events during the first meeting of the SEA Games Federation council,” said Tolentino, vowing that despite the recent development the Philippine bets would still challenge the Vietnamese hosts next year in Hanoi.

He also expressed confidence that the next year’s SEA Games would push through considering how Vietnam was successful in containing the global pandemic.  – Bong Pedralvez