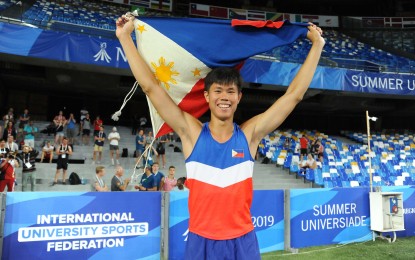 THE Philippine Sports Commission is coming to the rescue of Italy-based and Olympic-bound pole vaulter Ernest John Obiena, who complained recently that he has not been receiving any financial assistance from the government sports agency since January.

“Nothing has been released (by the PSC) since January. It’s a little bit hard. I’m still paying my fees, my dues, and the people working with me needs to get paid, too,” Obiena said in the “Track Talk” webcast last Tuesday night organized by pinoyathletics.info.

The country’s first Olympic qualifier made his season debut over the weekend in Trieste, Italy, clearing 5.45 meters to capture the silver medal in the 13th Trivineto athletic meet behind Braz, who bagged the gold medal with a jump of 5.50 meters.

“We are now fixing the issue once I learned from the father-coach of EJ (Obiena’s nickname) Emerson about the delay,” Iroy said, noting that what delayed the aid was the P6 million in unliquidated support earlier given by the PSC to the athlete.

“I have talked to the athlete’s parents, informing them that our accounting department is processing Obiena’s financial support,” Iroy said. “We will always give premium assistance to our Olympians.”

The 30th Southeast Asian Games gold medalist is scheduled to see action next in the Monaco leg of the prestigious Diamond League athletic series on Aug. 14 where he will be pitted against the world’s best. The meet looms as a preview of next year’s men’s pole vault finals of the Tokyo Olympic Games.