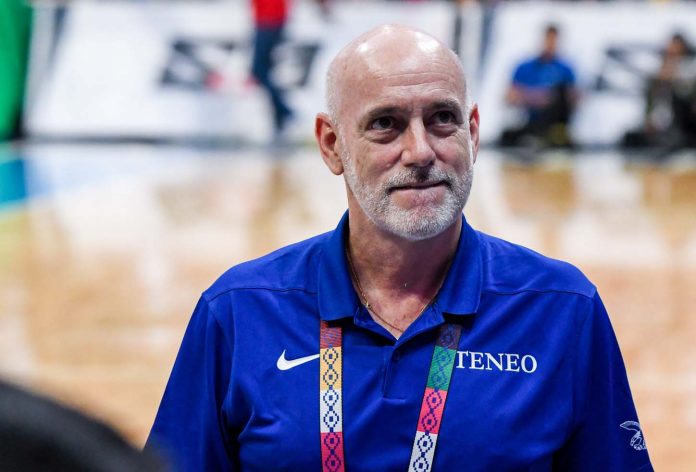 ONE WOULD think that losing key players such as forward Thirdy Ravena, twins Matt and Mike Nieto, center Isaac Go, and shooter Adrian Wong due to graduation would hurt Ateneo’s “four-peat” bid in the 83rd UAAP basketball tournament.

Blue Eagles coach Tab Baldwin is convinced that his prized recruit Dwight Ramos can promptly make an impact when he suits up for Ateneo.

“I’m not big on talking about individual player impact but certain players like an Ange Kouame do have extraordinary impact on your roster and on the games. I think Dwight (Ramos) has a chance to make a significant impact,” said Baldwin during an episode of the “Coaches Unfiltered” podcast.

“But I think, you know, as far as the highlight reels and the average fan, they won’t see it,” he added.

The 6-foot-5 Ramos was born in California to a Filipino father and a Russian mother and was surprisingly a member of the Gilas Pilipinas squad that ripped Indonesia 100-70 in the first window of the 2021 FIBA Asia Cup qualifiers last Feb. 23.

Baldwin said Ramos, 21, is the type of player who can do the intangibles for the team.

“Somebody like coach Pao (Layug, one of the hosts of the podcast), who you know, who delves into the analytics, will see it quite significantly, because Dwight’s the kind of player that has across the board impact in a game,” gushed Baldwin.

“He’s a very intellectual player. He’s not just a great athlete with very good skills, but he impacts the game. He impacts the court spacing by how he plays offensively and defensively.”

With its usual September opening unlikely due to the threat posed by the deadly COVID-19 pandemic, among the options that the UAAP is mulling is to launch its new season, set to be hosted by La Salle, in early 2021.

The Eagles of Katipunan annexed their third straight crown last year, sweeping University of Santo Tomas in two games in the finals on their way to a perfect 16-0 season.

Forward Raffy Verano and shooter Jolo Mendoza are expected to return to the Eagles after sitting out last season due to academics.

Six-foot-3 guard Eli Ramos, Dwight’s younger brother, is also set to suit up for Ateneo. Dwight is eligible to play for the Eagles for two years, while Eli is good for five years.

Grit over height? This we have to see