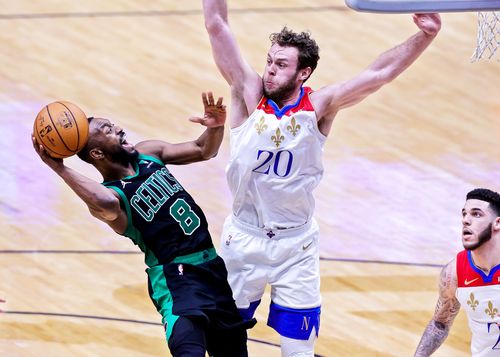 BRANDON Ingram scored 33 points, including a go-ahead 3-pointer with 34.4 seconds left in overtime, as the host New Orleans Pelicans overcame a 24-point deficit to defeat the Boston Celtics 120-115 on Sunday (Monday in Manila).

Zion Williamson had 28 points and 10 rebounds to help lead the largest comeback in New Orleans history, while Josh Hart had 17 points with 10 rebounds and Lonzo Ball scored 16 for the Pelicans.

Jayson Tatum scored 32 for the Celtics, Jaylen Brown had 25, Tristan Thomson and Kemba Walker added 14 each and Aaron Nesmith had 10.

Brown made a layup to give Boston a 112-111 lead with 1:12 left in overtime and Ingram tied it with a free throw and added a 3-pointer to give the Pelicans a 115-112 lead. Walker missed a 3-pointer and Hart hit two free throws for a five-point lead with 18.6 seconds left as New Orleans closed it out.

Kyrie Irving scored 28 points with eight assists as the Nets improved to 7-0 against the Pacific Division this season. Joe Harris, DeAndre Jordan and Bruce Brown scored 13 each for the Nets. Brooklyn’s Kevin Durant (hamstring) missed his fourth straight game. The Nets lost forward Jeff Green with an apparent shoulder injury with 2:50 remaining.

Paul George had 34 points and seven rebounds but sat out the game’s crucial minutes down the stretch while on a minutes restriction. Kawhi Leonard had 29 points with five 3-pointers and 13 rebounds, while Ivica Zubac finished with 13 points and eight rebounds.

Giannis Antetokounmpo had a double-double by halftime and he combined with Khris Middleton for 70 of host Milwaukee’s points in the victory over Sacramento.

Antetokounmpo finished with a game-high 38 points and 18 rebounds, while adding four assists. Middleton finished with 32 points, while shooting 13 of 22 from the field and adding eight rebounds, six assists and four steals. The Bucks won their second consecutive game after snapping a five-game losing streak.

Sacramento dropped its seventh consecutive game and played without leading scorer Harrison Barnes (left foot strain) for the third consecutive game. Rookie Tyrese Haliburton led the Kings with 23 points, while adding eight assists and five rebounds and was one of six Sacramento players to score in double figures.

‘The Natural State of Being’