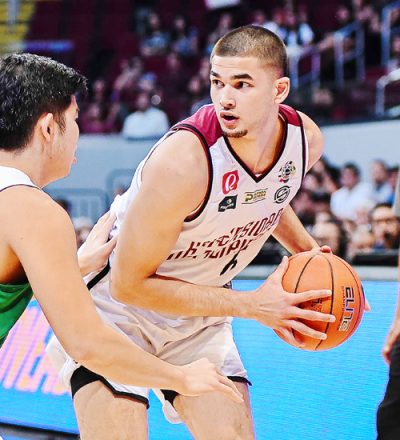 COUNT University of the Philippines forward Kobe Paras among the growing number of athletes condemning the death of African-American George Floyd.

“My skin color is white, but I am Filipino. This still makes me privileged,” Paras wrote on his Instagram story.

“But I will stand for what is right and be there for my brothers and sisters,” he added.

Floyd, accused of using a counterfeit $20 bill at a retail establishment in Minneapolis, Minnesota last May 25, was handcuffed, lying face down on the street during an arrest by Derek Chauvin, a white Minneapolis police officer, who kneeled on the right side of Floyd’s neck for eight minutes and 46 seconds.
Chauvin has since been arrested.

Floyd’s death has sparked widespread protests across the world, including from several NBA players like Lakers star LeBron James.

Paras, 22, called on others to speak and seek justice.

“Fighting for your rights is NOT a crime! If you have a voice/platform and you’re silent during this time, you’re one of those privileged people that are ignorant and selfish. For all those so-called ‘influencers,’ we don’t need your selfies or throwback pics. We don’t need any of that right now! Use your damn voice and stand up for what is right!” said Paras.

“Most of y’all are just posting just for likes and acknowledgment. It’s disgusting. To all the people I follow and not standing up, I see your true colors now smh.”

The 6-foot-6 Paras, a Mythical Five member in the last UAAP cage wars, first reposted an IG story from Fil-Am guard Jordan Clarkson of the Utah Jazz that featured a girl holding a sign that read: “Filipinos 4 Black Power.”

Clarkson, together with JR Smith, joined in the Los Angeles protests last Sunday.
Paras also reposted James’ story that said: “If YOU ain’t wit US, WE ain’t wit Y’ALL!”

He committed to the UCLA Bruins in 2015 but after a year, he entered Creighton University where he played sparingly in 15 games for the Bluejays.

In 2017, Paras was set to join Cal State Northridge and undergo a one-year residency but after the departure of head coach Reggie Theus, Paras decided to return to the Philippines.