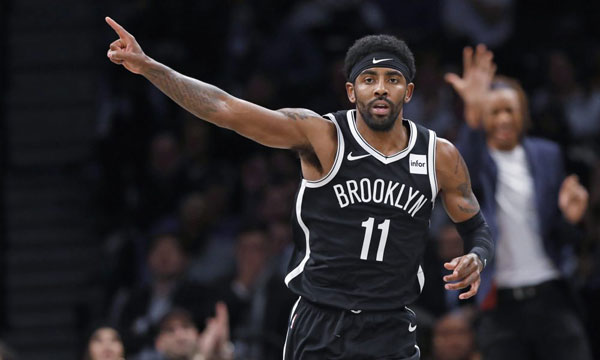 PLAYERS set to return to the court next month as part of the NBA’s restart are discussing the best way to push the “Black Lives Matter” movement to the forefront.

Brooklyn Nets star guard Kyrie Irving and Los Angeles Lakers teammates Avery Bradley and Dwight Howard are just three of the voices behind a coalition of players who have expressed concern that playing will take away from their push for social justice reforms in the wake of the death of George Floyd on May 25.

Twenty-two teams are scheduled to resume play on July 30 near Orlando, Fla., and dozens of players joined a conference call Monday to air concerns about playing at all this summer after a call Friday that included around 100.

The coalition also seems to have reservations about the basketball piece, too, including a rise in coronavirus cases in Florida and concerns about the restrictive environment put in place to help mitigate the spread of COVID-19 to the players, staff and league personnel, ESPN reported.

The coalition released a lengthy statement to ESPN on Monday.

“We are combating the issues that matter most: We will not accept the racial injustices that continue to be ignored in our communities. We will not be kept in the dark when it comes to our health and well-being. And we will not ignore the financial motivations/expectations that have prevented us historically from making sound decisions,” the statement read.

“This is not about individual players, athletes or entertainers. This is about our group of strong men and women uniting for change. We have our respective fields; however, we will not just shut up and play to distract us from what this whole system has been about: Use and Abuse.”

NBA commissioner Adam Silver responded to the players’ multifaceted concerns while speaking to Monday on ESPN’s “The Return of Sports” special.

“Listen, it’s not an ideal situation,” Silver told ESPN. “We are trying to find a way to our own normalcy in the middle of a pandemic, in the middle of essentially a recession or worse with 40 million unemployed, and now with enormous social unrest in the country.

“And so as we work through these issues, I can understand how some players may feel, that it’s not for them … it may be for family reasons, it may be for health reasons they have, or it may be because they feel – as some players have said very recently – that their time is best spent elsewhere. …

“Things are changing around us. The social unrest in the country was – in the same way we never could have predicted the pandemic would unfold, in the way it has – what’s happened since George Floyd’s death is also unprecedented.

“I’m incredibly sympathetic and empathetic to what’s happening in people’s lives. And in the midst of all that, to say, ‘We’re looking for an opportunity to restart this league, to try to move forward with crowning a champion,’ it’s not top of mind for a lot of people.”