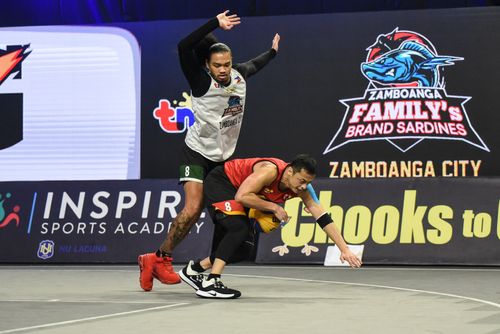 ONE would think title favorite Family’s Brand Sardines-Zamboanga City Chooks was still licking its wounds from a stinging loss the last time out.

Fil-Am forward Joshua Munzon scored on a two-pointer that gave Family’s Brand Sardines a 20-16 lead in the last three and a half minutes, but Butuan City guard Chris De Chavez answered with two longballs of his own to knot the match at 20-all.

Munzon scattered 11 points, while Santillan and wingman Alvin Pasaol chipped in six and three markers, respectively for Zamboanga City, which redeemed itself from a stunning defeat to Pasig-Sta. Lucia Realtors in their quarterfinal duel in Leg 3 last Sunday.

“When we lost that game (against Pasig), I felt like the world was crashing down,” center Troy Rike said.

“But I just reminded myself that if we take care of business, we’re right we need to be even after a bump on the road,” he added.

De Chavez carried the fight for Uling Roasters with 12 points, while former PBA player Karl Dehesa and JR Alabanza had four apiece as Butuan City still won P100,000 after Bounty Agro Ventures, Inc. president Ronald Mascariñas pledged the amount to whoever Family’s Brand Sardines will battle in the final of any leg.