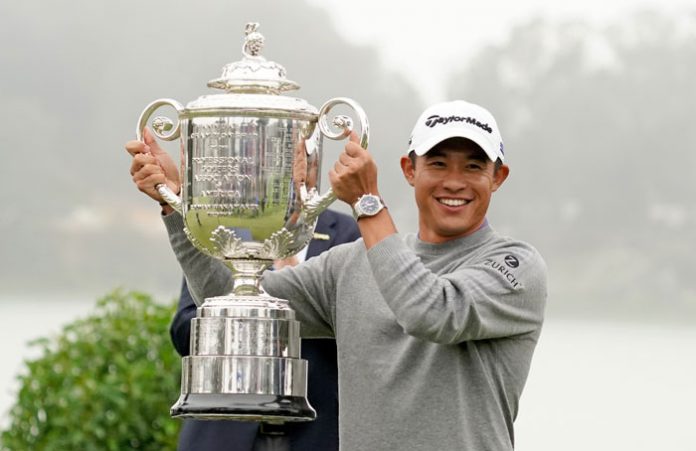 SAN FRANCISCO. — Collin Morikawa made a stunning late eagle after the drive of his life to pull away from a jampacked leaderboard and secure a two-shot victory at the PGA Championship on Sunday in only the second major start of his career.

The 23-year-old American, who began the day at Harding Park two shots back of overnight leader Dustin Johnson, shot a bogey-free six-under-par 64 to reach 13 under for the tournament.

Former world No. 1 Johnson (68) and English Ryder Cup veteran Paul Casey (66) finished in a share of second place, while the wheels came off Brooks Koepka’s (74) bid for a third straight PGA Championship title early on.

Morikawa, whose only mistake of the day came when the lid fell off the Wanamaker Trophy as he lifted it up on the 18th green, said he was on “cloud nine” after the win.

“It’s hard to think about what this championship means, and obviously it’s a major, and this is what guys go for, especially at the end of their career, and we’re just starting,” he added.

The first major of the COVID-19 era, played without fans on a cypress-lined municipal course, looked headed for a playoff as the day began with 11 players within three shots of Johnson, and at one point late in the round seven players shared the lead.

Morikawa got his nose in front at the par-four 14th where he chipped in from 54 feet for birdie.

Then, after narrowly missing a birdie at 15, Morikawa hit the shot of the tournament as his drive at the 294-yard par-four 16th settled seven feet from the cup to leave him with a putt for eagle.

“We were just hoping for a really good bounce, and we got it, hit a really good putt, and now we’re here,” said Morikawa, who collected the third win of his career and the second since the PGA Tour resumed in June.

With the win, Morikawa joins Jack Nicklaus, Tiger Woods and Rory McIlroy as the only players since World War Two to win the PGA Championship at age 23 or younger.

Koepka began the day two shots off the lead but slid out of contention after going four over on the front nine, a stretch that included three consecutive bogeys going into the turn as he struggled with the thick rough and green speeds.

“You know … wasn’t meant to be,” said Koepka. “Three in a row, you’re not really supposed to do two in a row looking at history, but that’s all right. Got two more (majors) the rest of the season and we’ll figure it out from there.”

Koepka finished on three under for the tournament, tied for 29th.

Johnson, who was in a share of the lead late in the day, suffered a bogey at 14 shortly after Morikawa made his move. He is the first player to finish runner-up at the PGA Championship in consecutive years since Nicklaus (1964, 1965).

Casey was tied for the lead when he reached the 17th but his hopes of a maiden major championship suddenly slipped away as Morikawa, one group behind, hit the tee shot that led to an eagle and a two-stroke cushion.

“I played phenomenal golf and there’s nothing I would change,” Casey said after his best finish in a major.