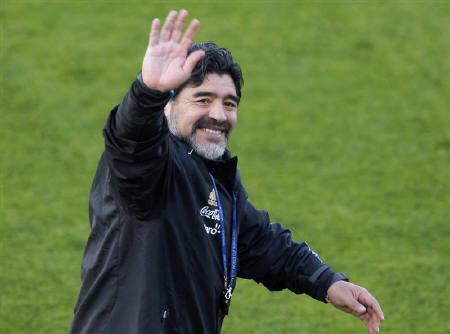 BUENOS AIRES. — A decision to restructure Argentine football that will save Diego Maradona’s club from relegation was dubbed another Hand of God moment on Tuesday, but the former striker said the divine intervention he wished for was to beat the coronavirus pandemic.
The Argentine Football Association voted to suspend relegation for two seasons on Tuesday, saving the Maradona-coached Gimnasia club, which is currently bottom of the league, from going down.
“This happened to us today and many people are calling it a new Hand of God,” said Maradona, who dubbed his notorious hand-assisted goal against England in the 1986 World Cup as the Hand of God.
“But today I am asking for that hand to do away with the pandemic so people can get back to living their lives, with health and happiness,” he added.
Maradona said he disagreed with the decision to suspend relegation for two years but called the favorable ruling “a prize.”
Argentina has so far recorded 4,127 cases of COVID-19, with 214 fatalities.

Knowing your risks for diabetes