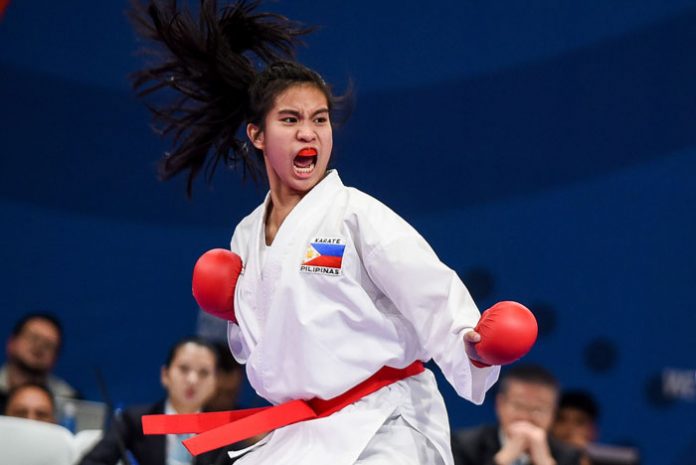 SOUTHEAST Asian Games karate gold medalist Jamie Christine Lim is “hungry” to return to the gym for actual training in her build-up to qualify for the Tokyo Olympic Games next year, according to karate chief Ricky Lim.

The KPSFI president said the Joint Administrative Order issued by the Philippine Sports Commission, Games and Amusement Board, Department of Health and Inter-Agency Task Force last Monday would pave the way for locally-based Olympic aspirants in karate to resume actual workouts.

“We believe that karate is included in that JAO but we still have to wait for word from the PSC where we can actually train with our Olympic hopefuls,” said Lim, adding the association has submitted its health and safety guidelines and discussed them with the government sports agency’s officials earlier.

“We were told that we could resume our actual practices for these athletes at an area at the Philsports complex in Pasig. For us this is good enough. It’s a start,” Lim, a former SEA Games gold medalist in men’s kata, said.

Lim said some of the other national athletes might join the Olympic hopefuls who will serve as their respective sparring partners.

He said the other Olympic aspirants such as Filipino-Japanese karateka Junna Tsukii, also a SEA Games gold medalist; and Fil-Am Joanne Orbon, who won a bronze, were able to train in Japan and in the US, respectively, more freely.

“They (Tsukii and Orbon) are actually doing very well because they can now spar and train at their respective gyms.”

The Olympic aspirants are looking forward to competing in the world Olympic qualifying competition rescheduled in June 2021 in Paris, France.

Lims said the locally-based national athletes continued to conduct workouts online to remain in shape since the country was locked down in mid-March to limit the spread of the novel coronavirus.

“The only thing missing is the distancing and reaction because they do not have sparring partners,” Lim said.

Jamie said she was fortunate to have an area in her residence to do physical fitness and conditioning workouts “so that we will be fit and ready once we can resume actual training and do some sparring.”

What? No complaint filed vs Ayo?