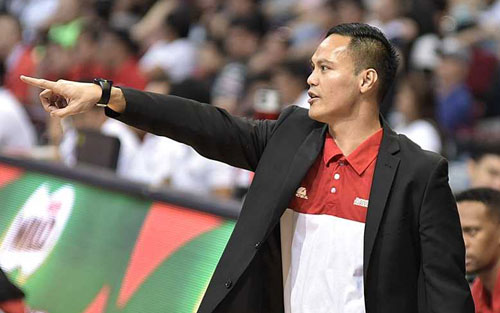 The Elasto Painters named erstwhile deputy Chris Gavina as their new tactician, with Garcia staying on as active consultant.

“We are excited to announce the appointment of Chris Gavina as Rain or Shine’s head coach,” the team said in a statement on its Facebook page.

“He brings with him several years of experience as a coach in both the PBA and MPBL.”
Born in the Philippines but raised in the United States, Gavina, 42, served as KIA (now Terrafirma) assistant coach in 2016 behind Sen. Manny Pacquiao but acted as de-facto strategist.

In 2017, Gavina, a chemist by profession, called the shots for the squad until he was replaced after just one season.

Gavina spent the last three years as one of Garcia’s assistants, while also coaching in the MPBL with stops at Valenzuela and Bacoor.

Garcia, who took over from Yeng Guiao in 2016, will still be the team’s head of basketball operations.

“Effective immediately, Caloy Garcia has been named active consultant and remains head of basketball operations for the Rain or Shine Elasto Painters,” the statement added.

“Garcia will now be providing his veteran experience and leadership for the benefit of the team on and off the court.”

Garcia steered Rain or Shine to three semifinal stints in the last six conferences but could not get over the hump.

The Elasto Painters last won a title in the 2016 mid-season Commissioner’s Cup under Guiao.

In last year’s Philippine Cup bubble in Clark, the Raymond Yu and Terry Que co-owned ballclub wound up with a 6-5 card after the elimination round.

Rain or Shine was sent packing by eventual champions Ginebra in their quarterfinals duel.Gavina will bank on young stars Rey Nambatac and Javee Mocon, and veterans Gabe Norwood, James Yap and Beau Belga.

The squad traded Sidney Onwubere and Clint Doliguez to NorthPort in exchange for big man Bradwyn Guinto last January and did not renew the contracts of guards Ryan Araña and Kris Rosales last month.

The E-Painters have the No. 5 pick overall in the rookie draft set on March 14 likely to be held virtually due to the restrictions posed by the dreaded COVID-19 pandemic.

SUBSIDIES TO FIRMS POSSIBLE: 1M yet to get jobs back