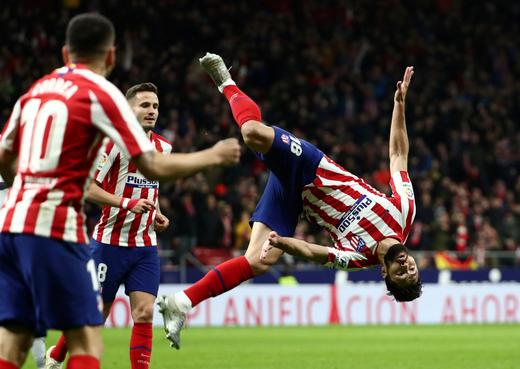 MADRID. — Five players in Spain’s top two divisions have tested positive for COVID-19 since clubs began testing players and staff members last week, organizing body La Liga said in a statement on Sunday.
La Liga said the players would remain at their homes where they would continue individual training before being tested again “in the next few days” to determine whether they can return to their club’s training ground.
Many clubs including champion Barcelona have returned to individual training as part of the second stage of La Liga’s four-phase protocol for getting back to activity after play was halted in early March due to the pandemic.
La Liga, which last week said it was hoping to resume matches without spectators in June, said detecting positive cases was vital to its program for returning to activity.
“One of the objectives of these tests was to detect asymptomatic cases. That way, we guarantee everyone’s safety as we return to work and comply with rules on workplace safety,” added the statement.
“La Liga has warned all participants of the training sessions to not relax the recommended safety measures at facilities or their homes to ensure the number of infections remains low.”
The statement added that the league would not divulge the names of infected players due to data protection laws.
Real Sociedad goalkeeper Alex Remiro said on Saturday he was one of the players to test positive.
“Many thanks for the messages of support, I tested negative on the PCR test and all I have are remains of antibodies which will be gone soon and soon other antibodies will appear telling me I am cured,” he wrote on Twitter.
“I will return to training soon but for now I’ll have to keep training hard on the indoor bicycle.”

Financing support vs COVID hits $10.6B