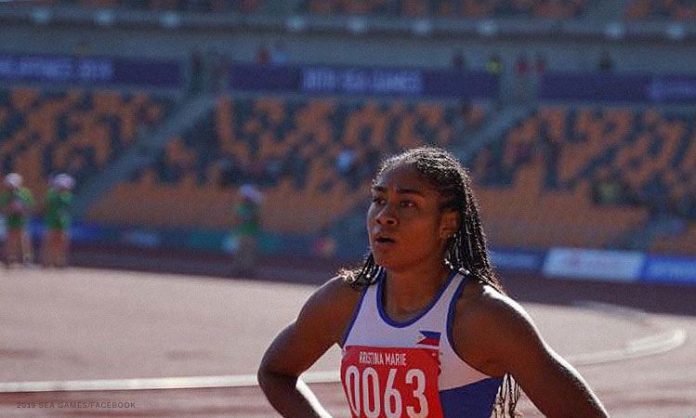 FILIPINO-AMERICAN sprinter Kristina Knott kicked off her campaign to qualify for the Tokyo Olympic Games late last month, seeing action in two competitions in Florida and coming up with results showing that that she is steadily getting back into competitive shape.

In her latest performance last Aug. 1 (Aug. 2 in Manila) obtained by pinoyathletics.info from American coach Rohsaan Griffin, Knott swept the women’s 100-meter and 200-meter runs at the Evolution Track League in Winter Park, Florida with times of 11.75 and 25.18 seconds, respectively.

Griffin, who has been the consultant of the national track team tapped by the Philippine Athletics Track and Field Association for four years now, also furnished the athletics website with the results of the 30th Southeast Asian Games double gold medalist’s other race.

The former University of Miami varsity ace had her first race last July 25 (July 26 in Manila) and also scored a golden double, ruling the women’s 100 and 200-meter sprints, clocking 11.52 and 23.21 seconds, respectively, at the JAC Final Countdown meet in Jacksonville, Florida.

Knott earlier recorded 11.51 seconds as the best performer in the preliminary heats of the century dash, which was better than her silver-medal winning time of 11.55 seconds in the 30th SEA Games.

Her winning time of 23.21 seconds in the same meet was two-tenths of a second slower than her Southeast Asian Games and national record of 23.01 seconds in bagging the gold medal in her SEA Games debut at the New Clark City Athletic Stadium in Capas, Tarlac last December.

The Olympic qualifying times are 11.15 and 22.80 seconds, respectively, and Knott is bidding to become the first Filipina sprinter to make the cut in both sprint events since the legendary Lydia de Vega achieved the feat in the 1984 Los Angeles and 1988 Seoul Olympics.