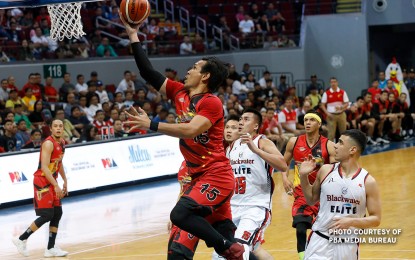 SAFE and aware of what’s going on around him, June Mar Fajardo should be free of concerns other than getting his recovery program done.

The San Miguel Beer center admitted to having “mixed emotions” about his fellow PBA players returning to the practice gyms amidst the growing coronavirus infections.

The PBA was given the green light to return to the practice gym last Monday by the IATF, which also allowed gyms to open in areas of the country under the general community quarantine.

Metro Manila, where practically all of the PBA teams’ practice gyms are located, is included in the GCQ list and the PBA hopes to start the workouts by Aug. 10 or 11.

Fajardo still could not participate in such practices since his right shin bone still has to fully heal after being broken last February, about a month before the PBA was forced to shut down by the outbreak.

The 6-foot-10 behemoth has done away with his crutches and is now focused on strengthening his lower body under the watchful eyes of a therapist who comes to his condo unit. The earliest Fajardo could step on a basketball court and do basic drills is next January.

As such, Fajardo would not be among the PBA players who must undergo swab testing, a prerequisite for such practices.

Fajardo said the testing is a must for his peers.  “Para sa’kin OK ‘yung testing kahit masakit ‘yung swab,” he said.

Among the IATF-approved protocols for practices is each player staying within the mandated home-gym-home movement and stating where he went should he stray from that bubble.

Fajardo also wholeheartedly agreed with that.