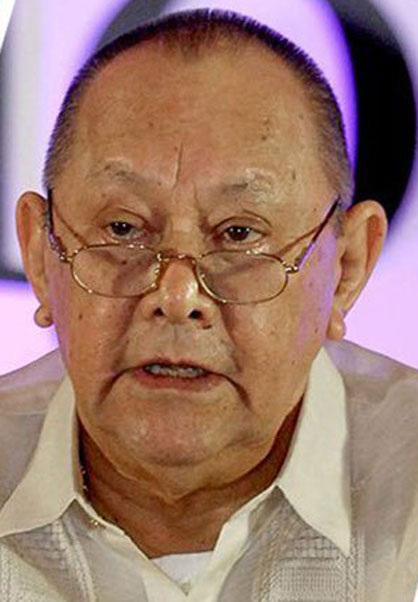 ALTHOUGH now living halfway around the globe, former national player Ricardo Brown could not contain his sorrow after learning of the death of his former patron, businessman-sportsman Eduardo “Danding” Cojuangco, who passed away at St. Luke’s Medical Hospital in Taguig City yesterday. He was 85.

“Painful as hell to write this. I got the news about 4 p.m. when I was getting ready to run the lake as I do every day,” Brown, now a high school principal in the US, wrote on his Facebook page.

“It has taken me hours to write this because I am somewhat stunned at the realization that this man (Cojuangco) who is more than special to me is no longer with us,” he added.
Known as the “Quick Brown Fox” during his playing days in the pro league with Great Taste and San Miguel, the Fil-Am guard made his debut for the national team, then carrying the colors of Northern Cement and bankrolled by Cojuangco, that won the 1981 William Jones Cup tournament in Taiwan.

Brown recalled that his lasting impression with the former godfather of Philippine basketball was during the time when he asked Cojuangco’s permission to leave the national team and turn pro.

“The PBA opportunity was now a reality, but it all depended on the Boss (Cojuangco). I would have done whatever he wanted me to do,” Brown recalled of that meeting where he got the blessings of Cojuangco to turn pro.

“If you asked me to give you three descriptive words that would express my feelings for the Boss, they would be Respect, Admiration, and Loyalty,” Brown added.
An avid basketball fan, Cojuangco came into the basketball picture after being tapped as project director for the sport in 1980 by the late President Ferdinand Marcos to arrest the decline of Philippine basketball with the mass exodus of the country’s top amateur players to the then fledgling Philippine Basketball Association in 1975.

With American mentor Ron Jacobs, the former Loyola Marymount head coach, as his able and capable lieutenant, the former San Miguel top honcho initiated an ambitious plan to bring back the country back to its lofty standing in Asia.

The Cojuangco-Jacobs partnership reached its high point in 1985 when the Philippines regained the ABC men’s championship, dethroning China 82-72 in the finals in Ipoh, Malaysia and earning a ticket to the world championships in Spain the next year.

But Cojuangco’s dream of Pinoy cagers playing on the global stage was dashed when the country was engulfed in February 1986 by the “People Power” revolution that ousted Marcos.

It also compelled Cojuangco, a known Marcos crony, to flee the country and live for sometime in the United States. He returned in 1992 and regained control of San Miguel Corp. as well as his other businesses.

“Boss Danding was a visionary and a great loss to Philippine basketball,” said PSC Commissioner Ramon Fernandez, a four-time PBA MVP, who ended his playing career with San Miguel in 1992.

Meralco coach Norman Black, who played as an import for San Miguel, was grateful to Cojuangco “for giving me my first opportunity as a player coach for the San Miguel Beermen in 1985.

“At that time, he (Cojuangco) saw something in me that I didn’t see in myself,” added Black, who steered the club to its first PBA grand slam in 1989.

Sports columnist Quinito Henson, who runs one of Cojuangco’s charitable foundations, said that “Boss Danding will be missed but his legacy will live on forever … our country is saddened by the loss of a great nationalist … rest in peace!”