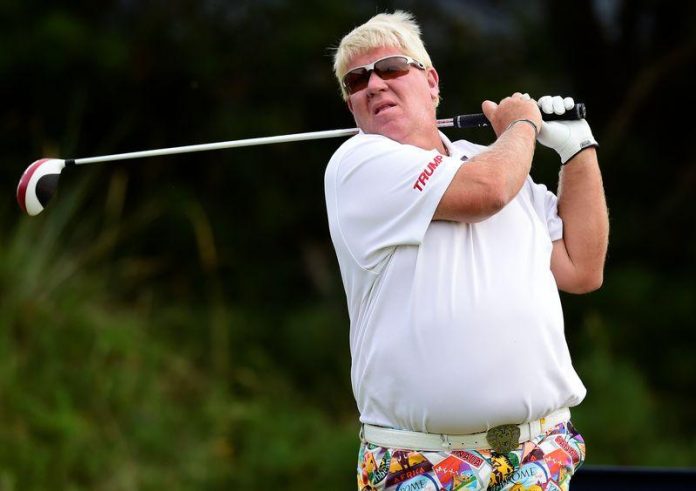 JOHN Daly, known as “Wild Thing” during his heyday on the PGA Tour, has said he was only trying to get some laughs when he jokingly said this month that a bottle of vodka and some Diet Coke is the cure for COVID-19.
Daly, who battled alcohol problems during his career, has faced plenty of backlash ever since the video, which he said was shot for members of U.S. President Donald Trump’s golf clubs across the world, surfaced on April 9.
Yet two-time major champion Daly, who opens the video with a plug for Trump Golf, said he did not mean any harm by his comments and prays for those affected by the coronavirus.
“Shame we can’t have any humor in this country or this world anymore, you know, without somebody busting your you know what,” Daly told Golf.com’s Subpar show on Monday.
“I didn’t mean to hurt anybody’s feelings. Hell, I was just doing it for fun, just try to get some laughs in the tough times we’re going through.”
In the 50-second video, which was shared on Twitter by Trump Golf, Daly said he hoped people were being safe and smart and he hoped the coronavirus outbreak would soon be under control.
Then Daly went into his “cure” for the disease.
“I only drink one drink a day, it just happens to be a bottle of good old Belvedere. Just drink one of these a day,” said Daly. “You know, sippy, sippy on a McDonald’s Diet Coke you know, wash it down pretty good. Never have a hangover. And that’s the way you kill this coronavirus I believe.”
Daly, who was a huge drawcard on the PGA Tour due in part to his outlandish attire and power hitting, won his first major at the 1991 PGA Championship after finding out just a day before the tournament began that he would be playing.
He followed that up with a British Open title four years later and has been competing on the 50-and-over PGA Tour Champions since 2016.—Reuters