MAGNOLIA coach Chito Victolero is among those who look up to the more seasoned tacticians in the land – for the right reasons.

It came as no surprise that Victolero also voiced out his own dissenting opinion on Tab Baldwin’s statements that have already drawn the ire of local coaches. 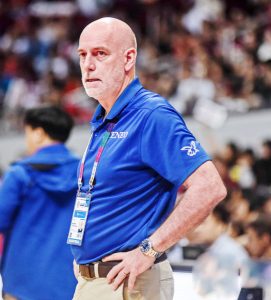 Baldwin hit a very discordant note when he stated during the “Coaches’ Unfiltered” podcast last Thursday that Filipino coaches are “tactically immature” and the PBA’s current format as “detrimental to the league.”

The Kiwi-American said the one-import format of the PBA stunts the growth of the game in the country, especially with “the rules latitude that the imports are given here by the referees and by the administration of the PBA.”

Baldwin, who steered New Zealand to a bronze medal in the 2002 World Cup, said he was surprised that local coaches are “significantly unaware of the tactical advancements and the systemic advancements of coaching systems coming out of Europe in particular, which you know, are built on the backs of player development.”

The statements drew a howl of protest from some local coaches and the Basketball Coaches Association of the Philippines. Even NorthPort owner Mikee Romero cried foul.

PBA Commissioner Willie Marcial is set to levy sanctions, most probably a hefty fine on Baldwin, but not after a mid-afternoon online discussion with the latter yesterday.

Victolero expects the controversy to be smoothed out soon but also said Baldwin, who has steered Ateneo to the last three UAAP titles, should have been more attuned to the feelings of Filipino coaches.

The Hotshots coach, at 44 the youngest among the PBA’s crop of emerging tacticians that include Blackwater’s Nash Racela, TNT’s Bong Ravena, Alaska’s Jeff Cariaso and Phoenix’s Louie Alas, also said one should only  look at Tim Cone.

In a way, Victolero, who steered Magnolia to the 2018 PBA Governors Cup crown and adjudged the 2018 Coach of the Year by the PBA Press Corps, admitted Baldwin’s comments should serve as a prod to all local coaches.

“It’s a challenge for us, especially the younger coaches,” said Victolero. “Kailangan lalo kaming mag-pursigi so we can go to the next level.”