MY dad told me a story of how my grandfather, then working at the warehouse of United Laboratories would talk about the merits of the Ford Transit—which by a normal van proportions of that era—was considered huge. His story took centerstage for my piece, because it seems all that made the vintage Transit an icon, are the very same thing that make this new Ford Transit, the marque’s new global full-size van.

The Transit is not new to the Philippines, according to my dad. Though not marketed by the old Ford Motors Philippines directly, it was sold by importers and serviced by Ford dealers. With Mantrasco (now Mantrade) and Tetra Motors leading the way. The Transit was developed in the United Kingdom and sold in many parts of Europe for about 50 years.

There were five things that made the van what it was back then. The short front hood, large swingout rear doors, the massive cargo (or passenger space) the tall roof and the forward mounted, low-in-chassis engine that provided for the flat floor without elevating the height too much. Back then it was a body on chassis with drum brakes on four corners, a 1900 cc diesel engine and 4-speed transmission.

Today, the Transit is unibody van featuring a front independent MacPherson strut suspension and a rear live axle with leaf springs with front and rear disc brakes as standard. Its’ short hood hides a 2.2-liter diesel engine that outputs 133hp and 385Nm of torque. Power is sent to the rear wheels through a six-speed manual transmission.

Driving the obviously large van seemed daunting but was surprisingly not challenged at all. One just needed to think “large” for every action. It makes wider turns, has several more blind spots that a normal car, and due to its height, one needs to be cognizant of overhangs at jeepney stops of protruding sidemirrors of trucks.

It should hit us as no surprise that the Transit is Europe’s best-selling van. And America lover is too as it looked sleeker than the Ford E-series. It seems that in every country where it is in, there is true love for this freight train pretending to be a big van.

Why is that? Well, my test drive revealed a lot.

First, its hugeness is just a disguise. This thing moves. I mean plump men can run, the Transit can really go. Not by drag racing standards, but there is a lot of confidence in it- even with all 18 people loaded up. I had it just a week before the lockdown, and I wished I had it during the lockdown so I could help in the transportation effort of stranded individuals.

Ford did a truly good and noble thing and actually make the test units available to transport. I personally saw it happen because the condo where I lived housed several nurses who were dropped off by the very same dark grey Transit that was lent out to my editor which I took stock of at the handover.

Second, it isn’t a box. A lot of motoring scribes erroneously call the Transit “a box.” They are wrong. It is a sexy box. That’s the operative word. Hyundai’s H350 is beautiful, but boy is this van sexy, the doors open wide and the stepboard drops down, but it does so elegantly. The huge passenger doors are surprisingly easy to handle, but to have a windscreen stretch into the heavens is something else. 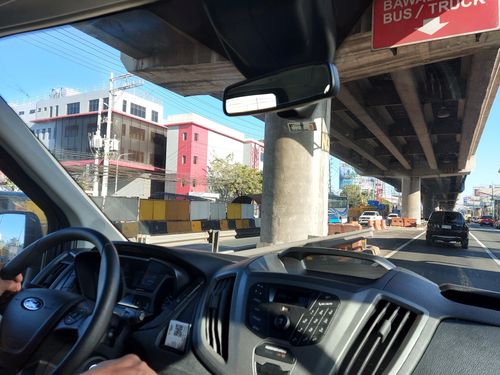 The trademark short front hood comes out to be sportier than usual (not as sporty as the Sprinter though) but sporty is not an adjective appropriate for this van. Capably sporty, yes, the blacked out front grille is really snazzy and aligns the look with the rest of Ford’s big rigs.

Third, stepping into the cabin, is like getting on board the F-train at lean season, or the luxury coaches on the London Express. Tall back seats, enough legroom and more than ample headroom to walk to the seats. The local PNR in Los Baños proved to be a great backdrop for the Transit—the train tracks have almost the same width as the van.

Fourth, the driving experience is like that of a freight train. One see’s far upfront, to the side and almost nothing in the back. One is seated tall and the engine pushes the weight of the fully laden Transit effortlessly. To test a fully laden vehicle my editor posted on Facebook for a free ride to Laguna and got 15 volunteers. They paid nothing and according to my dad left their fast food trash in the van when they alighted in Los Baños! (Ingrates!)

For the drive back, I invited friends for cups of coffee at Capital Commons from Makati where I picked them up from Don Bosco Church, so I didn’t have to look for a parking slot. Capital Commons was friendly to large vans, their outside parking with the width and the pavement to park with ease. Surprisingly though, the Transit, with its huge mirrors and parking assists was easy to maneuver into a slot.

Before being returned, the last assignment of the Transit while with my dad was to the Ateneo to bring my sister for her orientation. He tells me how he parked the van in the for-bus-only slots at the university parking lot. He also said how the van, despite its size buzzed only the Category 1 vehicle at the toll gates (we were charged Category 2 for the Hyundai H350 because of the tall air-conditioner nacelle).

There isn’t much else to say about the Ford Transit except that it does its job well, 15 times over. At a price tag of P2.3 million, the Transit is a performer. A beautiful performer.

Making awesome available to almost everyone