I ARRIVED at the American Manhasset mall in New York searching for the Tesla showroom which, according to Google Map was on the other end of the mall. I had just finished a diabolically delicious lunch at a nearby IHop and decided to walk the 10 blocks to burn off all the carbs.

It wasn’t hot that September day but it wasn’t chilly too, so I was perspiring when I reached the Tesla Showroom, still 10 minutes early for my scheduled appointment, and enough time to freshen up before a quickie test drive that was planned for 10 minutes but took almost an hour.

Tesla sales advisor Brittney Adornato gave me to go signal when the second customer canceled her test drive. That was indeed providential because I got to take both a Model S and a Model X SUV for a spin.

There are a few examples of Teslas in the Philippines.

I’ve seen a Model S owned by Manny Pangilinan and a Model X by a balikbayan who wanted to get his EV registered and street legal, but the closest he can get to is getting listed down it down as a golf cart.

There are about 3 to 5 more Teslas roaming around the country, some in the provinces, according to my motoring friends.

None of these Teslas however have been given proper authority to drive on Philippine roads because of antiquated and inane laws. They cannot be registered to be used legally. These now useless laws—designed for golf carts—could have been updated quickly, had our lawmakers focused on it instead of renaming streets to honor their ancestors.

That will change in a few months though. The Electric Vehicle Association of the Philippines, Senator Win Gatchalian and the car manufacturers–Mitsubishi and Nissan in particular–are doing tremendous lobbying to get their vehicles ready for registration when they launch.

A source at Nissan Motors in Japan tell me that the visionary Nissan Philippines president Atsushi Najima is pushing for the Nissan Leaf to be available by early 2020. There are mixed signals on that front though. My motoring friends estimate that it may be difficult to allocate the car since Nissan is having a lot of trouble catching up production due to the high demand. By the middle of next year, Nissan estimates it would have sold 500,000 Nissan Leaf EVS since it was first launched in December 2010.

Ormie Maramag, Advisor at Tesla’s Head office at Fremont in California coordinated all my requirements for this test ride, and eventually my test drive. Tesla expanded its operations in two new offices in Fremont just last year. About 1,500 employees not directly involved in the manufacturing were relocated here, including those working in the energy, sales, service, marketing and administrative departments.

So in San Francisco, I was able to get a test ride on a Model X, Tesla’s gullwing door SUV up and down the local streets while on the way to the Oracle Stadium where a baseball game, beer, chips and whatever else comes with the great American past time. I sat in the back first, the best place pundits say, to experience the 3.50-seconds needed to get to 60 mph (100 kph).

The person driving for me, (he asked at the start, no name and no photos) said that the Model X was such as in-demand vehicle despite the price tag. The Tesla Model 3 costs about $25,000 and the Model X, three times as much at $79,000.

Interestingly, in 2018, Tesla sold nearly 3,000 Model X cars in the Netherlands and only 500 in the US. This is according to the website Statista.com. The reason for the unbelievable gap? Tesla-Tax.

Tesla tax was implemented by the Netherlands government in early 2019, wherein electric vehicles with a value of more than 50,000 euros became more expensive to lease, resulting in much higher monthly costs. This tax had an influence on the sales volume of the Tesla Model S according to the data analysis website.

Though according to Tesla, by count there are now more Model 3s on the road in the US, in the urban areas like San Francisco, New York, Washington and Chicago there are more Model Xs concentrated in those cities by volume, most likely, because of the presence of the Tesla Supercharger recharging stations (there are 16,000 of these globally) and appeal of the unique gull-wing doors and the wow factor so many Americans desire.

Back to New York

As soon as I sit down in the Model 3’s cabin the fell of a different experience was almost instantaneous. For one the seats crouched very close to the ground. These were not Recaros but they wrapped around me quite dutifully. I buckled up and waited for the ignition keys.

Well, of course, I told myself. This is Tesla high tech. A push-button ignition should do the trick. But where is it?

My sales guide pulled out her cellphone. She said it is linked to the car. “You can use your smartphone as a key?” I asked. She answered in the affirmative but also explained that the same key mirrors all the driver controls in the central 15-inch touchscreen. The inside of Model 3 is unlike any other car. The all-glass roof extends from front to back, creating a sense of openness from every seat.

Openess. Now that is a word that I was waiting for. An open road.

The Model 3 is the most affordable of Tesla’s line up of full-electric vehicles. The X and 3 represents the end-to-end spectrum of the EV brand’s line-up. Separated by almost $50,000 but underneath there us nothing much to ruin the fun. Both cars can accelerate to 100 in less than 5 seconds and both have sophisticated navigational skills, handling prowess, though the X gets the win in the beauty contest.

Model 3. Easy to use, easiest to buy.

It is the company’s long-prophesized “electric car for the masses,” which at about $25,000 isn’t exactly the kind of masses we have here in the Philippines, or even in the US. The price tag includes a $1,000 delivery charge. However, the sleek, compact 5-seat sedan overflows with cool features and is available in 2WD and for $11K more, an all-wheel drive that is said to challenge any drag racer.

I drove the AWD, but according to my Tesla passenger / interviewee, the cheaper 2-wheel drive is perpetually in limited supply. Being the most popular of the bunch, the demand outstrips supply–waiting times could go on for up to 8 months. Tesla’s manufacturing hub in California struggles to get into full production mode to fill in the demand, says one

My first impressions of the Model 3 are excellent.

The exterior design is smooth and unimpeded. Since it does not need an air vent to cool radiators or engines, there is nothing to break the lines and curves of the design, which is vaguely familiar. The familiarity I can only describe as Mazda.

Franz von Holzhausen, previously design chief at Mazda North America, is currently in charge of design at Tesla Inc. Von Holzhausen had an already impressive resume with GM and Mazda before joining Tesla. His maverick ways in confronting design brought him great frustration with the traditional auto industry. This frustration combined with Elon Musk’s “off-to-Mars” ideas and problem-solving concepts helped him follow an unlikely path towards design thinking. He is now known as one of the most influential car designers of his generation.

Von Holzhausen’s thinking permeates all Teslas from its shape down to its brain.

Scale and the supercharging network

In terms of size, it is big enough for the typical American and bigger than needed for the parts of Asia where it is marketed. I keep referencing to the idea of having Teslas in the Philippines forgetting that for his particular model, an infrastructure is actually necessary to get it charged and moving. 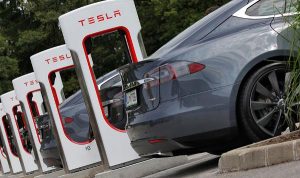 Called the Tesla Supercharger Network, it is the world’s fastest and currently the largest charging network with 1,604 supercharger stations with 14,081 superchargers. This powerful charging station will revitalize the battery while the driver is getting a quick bite, or a cup of Java. In as short as 30 minutes enough power can be transferred to the battery for a 100 mile (160 kilometers) drive. Either from zero or an additional boost. Using the Supercharger Network requires a subscription (immediately available when buying a Tesla) and pay-per-use. In Asia, Tesla superchargers are available only in the most traveled parts of China, Taiwan, South Korea, and Japan.

Tesla said that by November 2020, there will be nearly 20,000 Superchargers in over 2,000 stations worldwide (an average of 10 chargers per station). The targets are clear, more or less 1100 stations in North America, 600 in Europe, and 450 in the Asia/Pacific region.

Model 3 comes with 20” Überturbine wheels and performance brakes and lowered suspension for total control, in all weather conditions. A rear mount carbon fiber spoiler improves stability at high speeds, allowing all Model 3 to accelerate from 0-60 mph in as little as 3.1 seconds.

The length of the Searingtown Road taking a right to North Service Road then right up to Community Drive and into Northern Boulevard back to American Manhasset was about 22 minutes, including the mid-afternoon traffic. It is illegal to drive with both hands off the steering wheel in these roads in New York so automated and full autopilot is not available.

However, a large parking lot by the Marshall’s story provided the venue to briefly demonstrate the fully automated driving, which included, if fully operational a map of a destination and stops, speed, braking and distancing.

Next week: Tesla’s Summon, Automatic Pilot driving and why Tesla will need a different AI when driving in the Philippines.