PERPLEXING is the word that describes people who care not to know what is behind a name and simply judge something because of its race.

Yes, racial discrimination is found, and is largely unaddressed, with cars.

Take Maxus for instance. If it were a real person it would be seen as the child of an an Asian, a Chinese woman with a British man. Though the results are beautiful (see the G10, G50 and even the cargo hauling V10 Flex) the genes come into question, and oftentimes shrugged off because of idle chatter.

And like in real life, when proof of performance comes in volumes, critics are silenced and doubters become believers.

This is how I saw a nosy neighbor scrutinize the Maxus G50 one morning. This neighbor, whose automotive validation skills could be considered high, since he was once a car reseller judged the Maxus G50 even before a test drive. By the way, he always boasts about his having owned over 150 cars in his 12 years in the used car business. I could have easily driven the same number of cars since I got my license because of my father’s work. But I kept that comment in a thought bubble.

I realized that his experience with Chinese brand vehicles was not happy. He once narrated how he had bought a used pick-up and was not able to sell it. Not at least after 3 months and a costly transmission repair. He also had a diesel van, once the darling of the local government unit’s ambulance squads, which literally broke to pieces.

“Ano bang klase ang quality control ng yan mga yan? Ano ba ang loob niyan?” (What kind of quality do they have? How does it look inside?) he asked which caused me to invite him for a short test drive just to shut him up. Short was to be 68 kilometers to Manila. When I found out he was going my direction, I offered him a ride. It was the perfect opportunity to quell his doubts and deliver the gospel that Chinese-made will soon be the rule, rather than the exception. 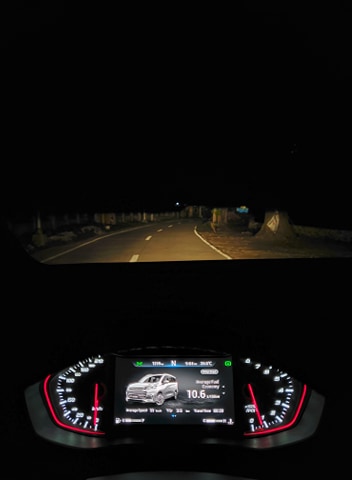 “Para palang Mersedes ito,” Nosy neighbor immediately commented, as he settled into the front passenger seat. If just the first impression already gave that “luxury” feeling, I wondered how would he feel on the drive.

The missions were this. I would go to Alabang to pick up a PS5 which I purchased from a friend in Hillsborough. He would go to his relative inside Ayala Alabang to leave something. So our route I would drop him off then go to my meeting and be back for him in an hour or so, after which we’d drive back home to Laguna.

But after my test drive, I personally think the Maxus G50 is one of the spiffiest MPVs around.

There is so much elegance in and out, so much that it overflowed of Mr. Nosy who began to praise what I was to be evaluating, starting off with the audio system. An early postscript to this story is the comparison he is making is with two MPVs he currently owns. One is a first-generation Xpander and the second one a low-mileage top-of-the line 2019 Innova, which he by the way bought after riding in a test unit with my dad June last year.

“Tamang tama lang ang laki nito,” he commented as we reached the Sto. Tomas boundary exiting right to the STAR tollway. We didn’t have an available RFID so that I warned him of possible traffic. We left quite early to avoid most of it.

What he meant by “tamang-tama” is the correct proportions. I agree with him on that point. There is no hugeness that gives the impression of “hard to park” or “wide turning radius” popping in my head. What gives it this particular stance is the tall beltline and the slinky almost taunting headlights and that massive two-part grille that seems to want to gulp everything that comes it way. It is muscular, athletic without being bulky. The color of the test unit that Stacey of AC Motors lent me—a nice bronzy brown—is elegant, truly European in its vibe. (I did see it in shiny pastel-ly purple, which I felt was a bit overboard. It’s young yes, but maybe more metallic finishes are more appropriate.

Midway I asked my passenger to give me a quote on what he felt the price was. This was after over 50 kilometers including a pee stop at the SLEX Caltex where he asked if he could ride shotgun. I obliged. 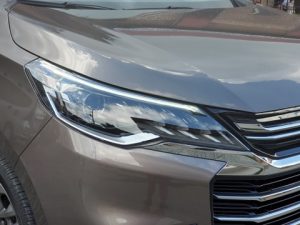 He confidently quoted P1.5 to 1.8 million just because of the features he took notice of, the smooth ride which he considered was extremely quiet. At this point he seemed to have shed off his despise for his quality perceptions earlier, especially after I told him the story of Maxus and how one of the biggest of the Big Four of Chinese automakers, Shanghai Automotive Industrial Corporation (SAIC) Motors bought the British brands MG and Maxus and inherited their DNA, incorporating it into their designs and content philosophy.

“It is only P1.288 million, mga P1.32 million if all in,” I said with an air of autocracy, like a British Lord educating his servants. He then agreed that it does look a lot pricier than its price tag. Why with 17-inch alloy wheels, a complete slew of daytime running lights, the wonderful leather and heavy stitching in the interiors, cubby holes, holders, electronic driving, parking and stopping aids, eight seats, and a lot of bits and pieces make it the MPV equivalent of a complete meal.

Touch and feel are what makes a good car interior elegant. So ditto of the elegant exterior is the ergonomics and feel of all the plastics and leather. Nothing feels cheap, and the many layers or curves and extensions adds to the Euro feel. 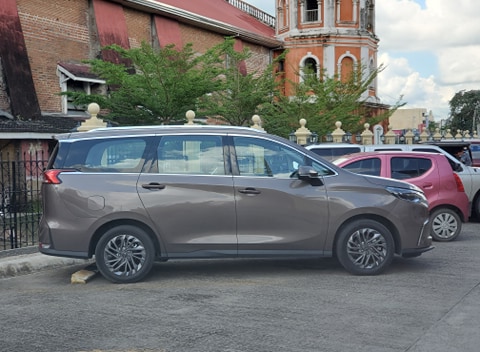 Here’s a rundown of what makes that Euro vibe so prominent.  First is the flat-bottom steering wheel, a sort of standard of the G50 is just as impressive as its exterior. Next is the large panoramic stretch of windows with blacked-out pillars that gives an impression of length. Add that to the stretched panoramic moonroof which I had opened at the Petron Km. 44 on the way back and completely wowed Mr. Nosy Neighbor.

Then there is a flat floor that goes all the way to the back, taking away the design flaw of cramming in adults in the rear with little or no consideration for head and knee room. Fifth is the reservation for shiny chrome, which makes me glad. Sixth, the large 12.3-inch infotainment system paired with a six-speaker audio setup with a Bluetooth setup that is easy and performs flawlessly.

Then there are seven, eight, and nine —the automatic headlights with follow-me functions, wireless smartphone charging pad that worked well with my Samsung, the slew or rear A/C vents, an automatic A/C system, and electric front-seat adjustment.

Number 10 is the 360-degree view used by a bunch of exterior cameras. Compared with another 360 system from Ford and Nissan, the Maxus has one confusing feature—that portrait layout of the side of the cars when the sensors detect it is too close to something. Also, I feel the camera’s capture angle is too narrow.

There are more touches that bring value to the whole package; a digital instrument panel with proper fonts (meaning not Times Roman), cruise controls that are more legible than some, full-access A/C controls in the middle of the second row, as well as third-row fan controls. There number alone of drop-down trays upfront and in the rear of the front seats gets a lot of notice too.

Mr. Nosy had been pondering if the engine was a 2.0-liter because I was not revealing anything to him until we climb up the twisty roads of Calauan on the way back. The Maxus G50 uses a 1.5-liter turbocharged four-cylinder that is built by SAIC in its Wuxi plant in China.

This has to be mentioned for two reasons. First, because this plant Wuxi is sort of a central depository of automotive technology in China. Many automotive companies from Europe and Japan are locators here. Second, the Wuxi plant has an annual capacity of 200,000 vehicles and has the latest assembly robots for both engine and bodybuilding.

The G50’s gasoline engine is capable of 167hp and 250Nm of torque. Connected to a seven-speed dual-clutch transmission makes for good power delivery. That good power delivery means that on flat roads, I could only test it with a maximum my 4 other siblings (that makes all of us) and though there was some hesitation in the climbs to Cavinti, it simply performed well. Unexpectedly well. Extremely surprising to my neighbor, who was by now itching to test drive the G50.

I gave him 10 kilometers driving back, at the risk of getting banned because I wanted to shush him for wanting to take over the steering. This was the 10 kilometers stretch from Los Baños to Bay, Laguna, and another 8 kilometers to Calauan where he reluctantly handed controls back to me.

One could argue that there was a bit of road noise, bumps, and thuds along the cracked surface of the Manila South Road. A lot of it was suppressed by most of it but a few shockwaves were transmitted to the cabin, especially driving across humps or cracked pavement.

This does not however mean that the G50’s ride leaves a lot to be desired.

“Parang mas maayos pa ito manakbo kaysa sa Innova ko,” was Neighbor’s comment. He only commented on how he felt that it sat so low compared to his Innova. I said what is felt was right. Moreover, he observed how he felt the Innova would have a stiffer ride. I explained both cars had similar but slightly different applications of the independent MacPherson strut and torsion beam combination.

At the end of the trip and back home, Mr. Nosy Neighbor offers me P1,000 to half the fuel spent. I refused his money and explained that it was a test drive through the generosity of Maxus. When the fuel meter goes red and the warning lights start flashing will I refill the tank. He was very surprised with the fuel economy reading—14 kilometers per liter meaning we only spent about 5 liters each way. 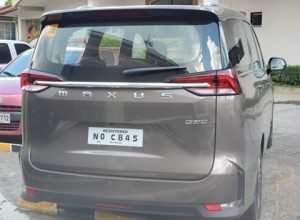 That calculation is raw but accurate if the econo-meter was to be consulted. We started off with 75 percent fuel in the tank, the meter still read half even after 112 kilometers back and forth.

The G50 is a polished act. It isn’t a Lexus but it exudes more luxury than the more mainstream offerings.

Driving dynamics and performance rank as above average. Amenities are over the bar so is feature-versus-price. My own family, not violating any safety protocols (family rules, remember) felt its roominess and abilities for the long haul. It can be said that for the price tag, the G50, given more time and marketing spirit, will give the competition shivers, if not goosebumps.