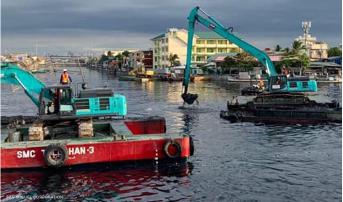 San Miguel Corp. (SMC) is gearing up to clean and widen Pasig River with the arrival of two new dredging equipment capable of pulling 600,000 tons of silt and solid waste out of its waters per year for the next five years.

“Through the years, Pasig River has become narrower and shallower because of accumulated silt and waste. By cleaning and widening it, we will be able to increase its capacity to keep water flowing within its banks especially during heavy rains,” said SMC president Ramon S. Ang.

SMC, together with the Department of Environment and Natural Resources (DENR), the Department of Public Works and Highways (DPWH) and other concerned government units, is targeting to extract 50,000 tons of waste per month from the river.

“After a thorough assessment of Pasig River, we identified sections where the depth of water has been reduced to as little as one meter. These are the most critical portions of the river that cause widespread flooding,” Ang said.

Ang said for the Pasig to effectively serve its purpose of channeling floodwaters out to Manila Bay, its depth should at least be 10 meters. “But garbage and silt over the many decades have reduced this to just one meter in these areas, clogging the river and causing water to overflow everywhere,” Ang explained.

SMC is undertaking a major river cleanup—its five-year, P1-billion corporate social responsibility (CSR) initiative to dredge and clean up the 27-kilometer Tullahan-Tinajeros River System which benefits other flood-prone areas such as Malabon and Navotas.

Launched in early 2020, with work only fully commencing following the lifting of enhanced community quarantine (ECQ), the project is seen to help solve flooding in Malabon, Navotas, Valenzuela, Caloocan, Quezon City, as well as Bulacan province, for the long-term.

Over 150,000 people in the Philippines acquire digital skills during COVID-19