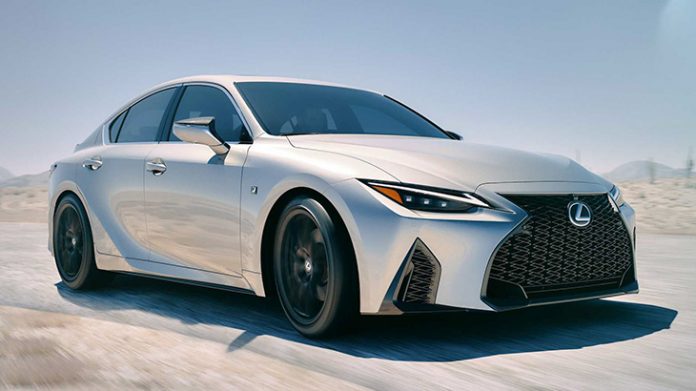 MARTIN Stockinger opened Lexus reveal of its latest luxury sports car and for good reason. This car is for “takumis”– artisans—and the art here is the driving, the brush, the new Lexus IS.

The IS is Lexus Philippines’s first exclusive launch during the pandemic. The combined virtual and actual launch was held at the Lexus Manila showroom in Bonifacio Global City. Not many were invited and as expected, the usual tedious safety precautions were conducted, including swab tests, protective facial apparel and social distancing.

Aside from the new IS sedan the updates of the LM MPV and the LC500 convertible was also introduced.

But this is the IS launch. For a sports sedan first introduced over 2 decades ago, the IS has kept its DNA—a compact sedan with a gentleman’s attitude and the performance of a sprinter when needed.

“They say the best things in life are experienced, when all your senses are activated,” Atsuhiro Okamoto, Lexus PH President said in his welcome remarks indicative of this very spirit that the IS is known for.

The IS has gone through a development process that has enlarged its dimensions, trimmed its weight and improved its balance through constant track testing. It is the only way, according to Lexus engineers, it can evolve and continue to evolve.

“With the aim of making ever-better cars, we have continued to make various efforts in “feeling the road” and “conversing with cars” through driving tests around the world, including our Five Continent Drive Project and the Nürburgring 24 Hours endurance race,” Lexus Master Driver Akio Toyoda explained.

So entrenched is Lexus in this design and development direction that they built their own race-track, the Shimoyama Technical Center Test Track, which has, for its peg, the Nürburgring Nordschleife driving circuit in Germany. The sprawling $2.8 billion 600-hectare road race course mimics the angles twists, twin curves, sudden uphills and severe downgrades of the famous German race track. Here is a road where vertical changes are so severe and abrupt that finding the proper suspension damping setting is critical. This is to benchmark the handling and stability of the vehicle in high speeds. “Based on such experiences, we have replicated a variety of roads in the world at the new test course. In addition to conducting driving tests all over the world, and with the replication of severe driving conditions at the new test course, we intend to thoroughly hone every one of our models and develop the types of cars that epitomize the true joy of driving.”

Utilizing the demanding road course, every performance aspect of the IS was finely tuned, from the engine, transmission, chassis, suspension, and safety systems. The F Sport variant has a 300hp, 380Nm naturally-aspirated V6 engine and eight-speed automatic transmission, while the IS 300h is powered by a 2.5-liter inline four-cylinder hybrid power plant mated to a Lexus E-CVT intelligent transmission.

The new IS comes with the LSS+2—a suite of the latest Active Safety features—such as the Dynamic Radar Cruise Control, Lane Tracing Assist, and the Automatic High Beam. The F Sport model comes equipped with the upgraded Pre-Collision system which detects oncoming vehicles and pedestrians, even when turning left or right at intersections.