GAC’s GS3 quietly does, what it does best

UNEXPECTED has become a common description for Chinese brand cars.

Sadly, other Chinese brands hide the fact that their cars’ origin is from the land of the red flag, using the Union Jack or some other device to shield that fact. 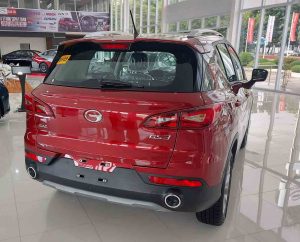 GAC Motor Philippines on the other hand, has been very honest. No frills in their approach, and selling based on merit rather than heritage, thoughtful pricing and a segment-correct selection of vehicles. The brand is creeping slowly into the mainstream, doing what is right—proper marketing and after-sales support.

For this test drive, I got my hands on the GAC GS3, a subcompact crossover aimed to slug it out in the popular segment—now quickly overtaking sedans as the choice of a younger driver. This GS3 uses a naturally-aspirated 1.5L DCVVT that produces 113 hp and 150 Nm of torque. And it is priced at only P888,000 (pre-tariff rates) which is the first puzzle: normally prices are measured on a per displacement ratio. The higher the displacement, the higher the price. This does not apply to the G3 AT.

Luxury throughout the range

If we are talking of a quality leap this is it. From the engine bay into the door panels, further into the interiors, the gap and tolerances are very high. That was the first thing that impressed me with the GS3–the tightness of the interiors. A curated mix of subdued colors, especially veering away from too much chrome or gold (ugh!) tells of its more tasteful execution.

The interiors are black and the reddish-brown accents—on the doors and the front dash—break the monotony. In the showroom, I saw the upper-end variants with mostly leather cladding. This however did not shame the 1.5-L because the fabric is molded and supple, there is much to appreciate here. Ergonomics of the seats and controls, the right-sized steering wheel.

That split C-pillar idea is my second puzzle–the illusion of a floating roof, like the deck of a fast craft, may appear novel to some, but it’s queer to me. I mean many cars have it, but the interlocking pattern on the GS3 is new. Nevertheless, it is a trademark of sorts for GAC, the design element appearing in many of its models.

There are enough power sockets upfront but not enough on the rear. With the ability to move the rear seat into various positions, a total cargo load of about 760 liters and be taller, squarer, longer, or wider.  The use of thin maple veneers on the trim finishes and the molded patterns on the seats is a classy execution.

It is very classy—in fact, that could be the cornerstone of all GAC cars—luxury throughout the line-up. When I walked around the cavernous showroom in Ortigas, this classiness was evident throughout the line up. No There is a genetic resemblance to the GS4. That resemblance stops at “makahawig sila” (they look alike) because the GS3, has its own athletic stance and build, like a young runner or pugilist, always ready to get into the game.

Getting into the game

That “getting into the game” seems to be the reason why the brand chose Ilongga Ariana Dormitorio who is a three-time Philippine Mountain Bike National Champion and Asia MTB Champion to be an endorser. I saw a YouTube post where she announced the partnership and look forward to how she can bring the power and prowess of the GS3 forward.

I had just come from a test drive of the Ford EcoSport and even just visually one can estimate that the GS3 is longer. Even the Suzuki Vitara which looks stretched still lacks the inches widthwise and lengthwise. The wheelbase is a lot longer than most subcompact crossovers, including the Changan CS35.

The drive is spirited, but I am told the 1.3 with the turbocharged is a lot more spritely. Doesn’t matter really. The first-time car buyer will be more interested in getting from condo to call center for example than to race to it. That does not mean however the G3 doesn’t have the oomph for it. It is pretty fast, I don’t have acceleration numbers because I didn’t have the proper venue to do it, but the seat of the pants feel, and how quickly the numbers on the digital scale run up to 100 kph is confirmation enough. And at this price point one gets more than enough.

In MTB and boxing, part of the push and punch come pound-for-pound.

That’s part of the magic of the G3. It is light enough and nimble enough to be flicked around for fun. Both the 1.3 and 1.5 versions are fed with gasoline and send power to the front wheels via a 6-speed automatic transmission.

There is a small amount of lag in the otherwise flawless transmission but the engine delivers the power without much effort. There is also a little drag between shifts, the engine, and transmission communicating to each other when to shift exactly so as not to waste fuel.

The GS3 stands on a pretty normal set of McPherson struts upfront and a rear torsion beam suspension in the back. The springs are pretty compliant, firm enough to keep the straight lines straight and give the car a lot of directional stability. Braking duties are performed by standard discs in the rear and ventilated ones up front wheels.

The drive home involved two stages. First, was the short hop to my place in Parañaque. Second, the long ride home in Laguna. The Ortigas to Bicutan trip proved more tedious as it was a short 8-kilometer sortie I covered in 78 minutes. The drive home which was 62 kilometers more only took 104 minutes–a blessing in the late afternoon congestion points along Calamba and Sto. Tomas, Batangas.

The GS3 kept me isolated from the hassles of the road. Cabin NVH is so low, comparative to the Korean and Japanese vehicles. The infotainment system is simple, (and honest) with none of the fancy colored interfaces and videos that sometimes clutter the screen. It was, in gray and black, a radio, and a Bluetooth connection. It’s all one needs, really.

Even the reversing sensor didn’t show what was actually happening behind but had a graphic of the car and a proximity sensor on the two rear corners of the car.

The trip home was adjusted by 32 kilometers–taking the Balete Exit in Batangas instead to avoid the heavy congestion just past Tanauan.

That also meant dropping by somewhere in Bulacnin, Lipa to pick up ornamental mayanas, (scutellarioides or Coleus atropurpureus) with orders texted from my mother.

It sits five comfortably and has a reasonable amount of rear trunk/cargo space.

It is frugal, reporting around 14 kilometers to a liter (7 liters over 100 kilometers) in my estimation (we returned it with ¼ tank of gasoline) while delivering a solid drive and supple ride. It is feature-packed and has a lot to offer in terms of gadgets and gizmos, power and fuel economy.

What GAC cannot offer, for now, is the brand power of a Japanese marque, or the backing of a powerful conglomerate like the Ayala Group has with Maxus, or what a Fe Agudo can do for Changan. It cannot yet match the network scope of MG with Covenant Cars, the commercial vehicle power of Foton as it took over Chery, or the geographical advantage of Laus Group and Haima.

What it does have, however, are thoughtfully-priced, visually and mechanically good products. These are enough to move it from quietly pushing the GAC brand, to trumpeting its achievements, especially to the brand-neutral markets in the provinces.

Reputation is built over time, but seeing GAC’s service and parts structure, its openness to exposing their vehicles to the media for review, hiring car industry veterans, and a clear direction to build a network with an honest-to-goodness desire to bring an excellent value proposition to the Filipino motorist, is going to be its biggest attractions.

By my humble estimates, the GS3, given its content and performance, could be the most useful and practical compact SUV P888,000 (tariff yet to be included) can buy. – with Raymond B. Tribdino