VERY little prepared me for the CS35. I had a running vision in my head of the only other Changan I drove, in China, in 2013 when I was working for the Chinese car maker Chery. The car was part of a “competitor impression test drive,” and truthfully none of the cars tested (CS35, Benni) then were very impressive then.

Fast forward seven years later, and Changan, now distributed here by Changan Motors Philippines Inc., brings in the CS35 (and four other models) to the country. And for good reason. Economic factors which caused the failure of several Chinese car brands in the past has opened the market and competition is now almost at par. That competition is fierce, cramped and painful for those brands who pockets or campaign machinery are shallow.

In the case of Changan Philippines, not only does it have the backing of a most respected automotive company in the country, but it also has the expertise and passion of people that made Hyundai a household name.

The CS35 I drove to The Farm in Batangas was a mindchanger. I had my deep biases having both worked for (and see what “quality” meant to the Chinese autoworker before 2015) and owned two Chinese cars meant my experiences were just locked in my head. Surprise, surprise because the CS35 failed to fail me, and right from the get go, impressed with its flair, fit, and function.

Part of the San Pablo-Lipa Access Road is an unnoticeable steep slope, climbing with a 6 to 8 percent grade. Mountain bikers dread it, trucks creep up it, and cars, with less than healthy engines, lose breath. This was where the CS35, with its turbocharged 1.4L gasoline engine with direct injection technology, first impressed me.

Now having a 7-Speed Dual Clutch Transmission (DCT) is all dandy but without the 158ps of power churned out by that small but robust mill, the CS35 won’t get up to speed. Credit the maximum torque of 235Nm to provide that climbing power to not only push up the steep grade quickly but overtake most of the other vehicles. That was excellent impression number two. Yes, I was rushing and may have, admittedly gone beyond the perceived speed limits in what is still a comparatively empty road but I was to meet up with the Changan team at The Farm, but I didn’t know big boss Fe Perez-Agudo was to be waiting for the media team at the entrance. So rush, rush, rush it was until I hit the Lipa-Alaminos Road intersection where, an early morning skirmish between a long trailer and a hapless (but wrongly placed tricycle) clogged-up the road ways like a layer of thick cholesterol in the arteries halted the flow of blood.

Luckily in that mess, I was entertained by the large 10-inch Touchscreen Multimedia System which by default provided access to the AM/FM radio. Entertained, here means I intuitively followed the path to connecting my phone to the radio to activate Spotify.

That was done first by downloading the Easy Connection app then linking the phone to the system. Not an automatic process but one that allowed me not only to play music and even do video playback through the phone mirroring feature in the 57 minutes I was in the cholesterol-like mayhem before making a left into the little road to The Farm. 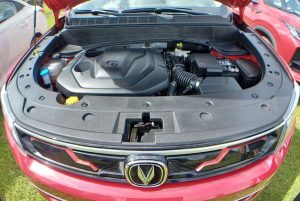 Those 57 minutes were spent, watching YouTube videos on how Changan partnered with both Ford and Mazda in a marriage that was to manufacture and sell Ford and Mazda branded passenger cars in China. Changan Automobile itself remained untouched to pursue its own brand of cars, distinct from those made under the joint ventures. However, it was not difficult to share technical know-how and design experience.

In such a relationship, passing on quality and design DNA is not difficult, and a lot of the process improvements that led to refinement of the breed is obvious. However, Changan chose to remain its own, and keep a R&D team for its own own-brand models. These include the Alsvin, CS series, EADO luxury EV line, RAETON series, Honor and Oushang automobiles and passenger cars. There are commercial vehicle models too under the Star sub-brand.

One of the videos was a product demonstration that revealed how the CS35 air conditioning system’s certified PM0.1 grade compound anti-bacterial and anti-viral air filter nearly a 100 percent filtration of 0.3-micron particles thus giving the entire vehicle the safety level of an N95 mask. (The average size of the coronavirus is between 0.06 micron and 0.14 micron, according to the World Health Organization.)

Usually found in more expensive cars, the CS35 has a Blind Spot Viewer and Reverse Camera Display which proved excellent in; parking at the now crowded entry to The Farm where we all had to undergo the mandatory swab testing and; while traversing the extra tight roads along the San Benito Kanluran access road and the San Benito Silangan road that had vehicles parked on both sides.

The Blind Spot Viewer had a peculiar habit of going “portrait” with the image on the side, instead of a full screen view. I found that disturbing at first until I realized the logic. The orientation (which does not distort the image in any way) also give the perception of the narrowness of the blind spot, which in my case, gave me the sense of extra caution. Once one gets used to it, it is actually very useful.

While connected to the system, Waze was calling out directions, but it was wrong directions because no had reported “bridge out.” So after almost an hour and two Steely Dan albums later, I had to make a 180 degree turn out of the road and instead follow mostly misplaced road signs to get to that final right turn to the Batangas health hideaway.

When I finally arrive at The Farm, the first people to greet me were Fe and her team, Kriska and Eda. Her delivery team car delivered the CS35 to my doorstep at night and while I Ieft early in the morning, thus I failed to look over the car as I usually do. But while waiting for the results of my swab test, I took a quick and the morning stroll around among other Changans, the CS75 and Alsvin (a Toyota Vios fighter, if there ever was one) and this is where the CS35 impressed me the fourth time.

A sporty rear spoiler with LED high mount stop lamp, standard 18-inch alloy wheels, and a panoramic sunroof were the first things ticked on my “like” list. It is the decidedly European, quaint and elegant front fascia that brings the real flair to the car. Along with the little extensions that protrude from the wheel wells, the overall look is honest, reserved yet potent.

That potency is all wrapped nicely in list of safety features including a 6-Airbag System Hill Descent Control (HDC), Hill Hold Control (HHC), Brake Assist, Electronic Stability Control (ESC) and Electronic Parking Brake. Add to that the Engine Remote Start that enables the driver to turn on the engine and air conditioning even before driving off using a Smart Key.

Pricing always is the big question, but value the real impression. Getting value is not just “your money’s worth” in this case, but what comes next. A well laid out dealership and service network and the backing of an “Agudo-standard.” That is where the real value is.

At an introductory price of P999K (the actual SRP is P1.069M) the CS35 brings to the market another option which in a tell of the tape comparison foretells of a good fight.