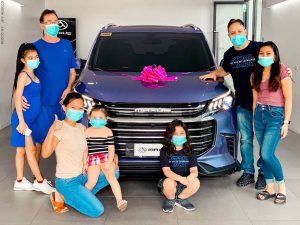 It was a seemingly predictable day for Frank Williams, a businessman based in Lapu-Lapu City in Cebu, until he watched a YouTube video review of a family MPV. Little did he realize that towards the end of that video, a choice he would make would significantly improve the quality of their lives.

The businessman was in the market for a family MPV, and what he discovered upon learning of the G50 was much more than he expected in an MPV. “I was captured by the upscale styling, 8-passenger seating, comfortable ride and upscale amenities (did I say upscale twice?) – features that are usually reserved for a much higher-priced vehicle,” he gushed.

The icing on the cake was the no-fuss service Williams received from Cebu’s Iconic Dealership. “I requested a test drive with the dealership online, and three hours later, their sales agent Joy Agullo graciously offered to drive the demo unit of the Maxus G50 right at my front door!”

Before the morning was over, Williams was able to convince his wife that the Maxus G50 was the one for them. “I had asked to wrap the demo unit with a bow so my wife will be surprised. I brought her out blindfolded with great fanfare and everyone had a good time gawking at the spectacle.”

Indeed, the Maxus G50 delighted everyone in Williams’ household even before their trips with the vehicle began.

The next day, Williams joyfully concluded the sale. Shortly after, his brand new Roland Purple Maxus G50 was already in his driveway.

Williams considers the Maxus G50 as one of the best purchasing decisions he has ever made. “The Maxus G50 looks and feels like an upscale luxury vehicle but thankfully comes at an economy price. What really caught my attention were the big 12” monitor on the dash, 17-inch wheels, power seats, 8-passenger seating, panoramic sunroof, power tailgate, leather seats and the wireless charger.”

Like Williams, you too, can discover how the Maxus G50 can brighten the start of your day and fulfill your special requirements in an MPV, may it be for personal, business, or family in nature. The G50 epitomizes the “do-it-all” attitude of multi-purpose vehicles, and is infused with Maxus’ 124 years of British-bred heritage and global expertise in vehicles, making the G50 the MPV that can do “Max More” at a value-for-money proposition.

Mazda Philippines, in cooperation with its 19 dealerships nationwide, announces a Preventive Service Campaign involving the replacement of fuel pump motors for various models in its lineup. The campaign covers a total of 1,838 Mazda units, which include the following models, sold in the Philippines:

The list of vehicles covered by the Preventive Service Campaign includes models produced between 2017 to 2019. No 2020 year model vehicles are included.

Notifications to the owners of the vehicles under this campaign have already begun as of October 20, to schedule them for their service appointments. The Preventive Service Campaign procedure involves the replacement of the fuel pump motor, which is a component of the Fuel Delivery Module (FDM). The FDM is not replaced. The fuel pump motor replacement is expected to take approximately 2.5 hours and is free of any cost to the customers.

All Mazda dealerships nationwide have been notified of the Preventive Service Campaign on October 13, 2020, together with the full Vehicle Identification Number (VIN) list of the vehicles included in the campaign. Implementation began immediately after the filing was done at the Department of Trade and Industry on Tuesday, October 20. The necessary replacement parts have been brought in, and already distributed to all Mazda dealerships. Communications from the dealerships to the customers is ongoing, with the vehicles within the campaign guaranteed to be served immediately upon their scheduled arrival.

Mazda customers are also encouraged to contact their respective service dealerships to know if their Mazda is included in the campaign by providing the VIN or Chassis Number as indicated in the OR/CR of the vehicle. The Mazda Philippines website will also be updated with the file containing the list of VINs covered by the Preventive Service Campaign.

“Preventive Service Campaigns are undertaken when necessary to ensure the optimum operation of every Mazda vehicle sold in the country,” says Ramil De Vera, General Manager of Customer Service Operation of Mazda Philippines. “We must always be transparent with our customers whenever their vehicles require such special attention. Their safety is our top priority, and that is why we are always quick to implement technical and performance requirements of Mazda Japan.”

Public Works and Highways Secretary Mark A. Villar announced that a new two (2)-lane bridge across Angat River in Bustos, Bulacan is about to be completed.
“We now wrapping up the construction of the 1.12 kilometer Angat Bridge along the Plaridel Bypass Road”, said Secretary Villar. Secretary Villar added that even with the challenges brought about by the pandemic, the P1.09 Billion project that also includes the construction Bridge No. 9 with a length of 40 meters and 1 kilometer road paving continues to move forward.
With funding support from the Government of Japan thru the Japan International Cooperation Agency (JICA), the 24 kilometers Plaridel Bypass Road has fully linked on May 2018 the North Luzon Expressway in Barangay Burol, Balagtas and Maharlika Highway in Barangay Maasim, San Rafael, Bulacan. 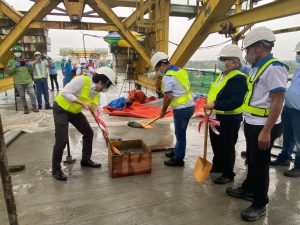 To fast-track the completion of the bridge project that will complement the widening of Plaridel Bypass Road from two (2) lanes to four (4) lanes, Undersecretary for Unified Project Management Office (UPMO) Operations Emil K. Sadain and Project Director Virgilio Castillo of DPWH UPMO Roads Management Cluster 1 held a meeting with JICA Senior Representative Kiyo Kawabuchi, Embassy of Japan in the Philippines Second Secretary Tomohiro Matsubara, and the joint venture contractor Shimizu-FF Cruz and the project consultants to thresh out issues in project implementation.
Undersecretary Sadain reported that in keeping with the target to complete by December 2020, the final concrete pouring of deck slab at end closure between pier 17 and 18 was held on Tuesday, October 20, 2020.
The new Angat Bridge consisting of seven (7) span pre-stressed concrete continuous box girder is being built by balance cantilever method on a bored piles foundation.
This new bridge and the additional two (2) lanes roadway will address the future increase of traffic utilizing the Plaridel Bypass Road as an alternative route to the Maharlika Highway, said Undersecretary Sadain.
With about 15,000 vehicles diverted from the congestion of Maharlika Highway at the town proper of Plaridel, Pulilan, and Baliuag some section of Plaridel Bypass Road during late afternoon up to night time have already shows traffic build-up.