DON’T disguise it with words like “sedan-like space” and “room enough for your friends” because Honda didn’t. The Honda Brio is a small car. No big car ambitions, just happy where it is which is the most honest statement.

In none of the press materials did it make allusions to an illusion of size. What it did promise was to challenge the status quo and “to break free from the crowd and head off in a direction of its own.” Now that is a statement that I can relate to.

Now the suffix RS did not change it being small—but added an element that gives a psychological boost—fun. No promises too of breakneck acceleration, tire smoking and drifting prowess it puts sense into how practical can still be fun. That is the emotion I felt all throughout this test drive.

It successfully combines sensible design (maximizing cargo and passenger space), performance (that’s a 1200 cc engine) with a bunch of cool (features (including dual airbags across the line-up). It’s smart, it’s logical, but it definitely has style.

I was, unfortunately, unable to join Honda’s media trip to Baguio. It was midterms and when you are in film making, that meant projects, in the plural. Yes projects, over projects. I was stumped. It was however providential that Honda lent the Brio RS when it did—finals. Which meant location shoots and gear to load.

The enormity of the task could have warranted a bigger car—like a van. But my classmates were the ones taking care of that. They were the people movers. I only needed to pack my gear and my crew to 4 different locations for the brief time I had the Brio. And I had to share that time with the original borrower of the car—my editor—who said he just wanted to test drive it up his favorite parking lot in Robinson’s Manila, which he claims has the same grade as Kennon Road in Baguio. I sort of think he is right, as he measured the angles with the clinometer of the Suzuki Jimny, then of his own Patrol.

The first thing that my crew told me was “how are we going to fit in there?” The next question was “how do we pack our gear?” But with no complaints, the little Honda took in 4 people (myself included), sitting infront was my rather plump lightman with this equally plump back pack, which he swears never leaves his side. The gear included a camera, tripods, light stands, lighting equipment, a tent, sleeping bags and a 20-liter water jug. We also had backpacks with stuff for 2 days of shoot, I brought a sleeping bag knowing how shoots can get nasty.

The Brio is a very attractive car.

But when I was thinking of size, the picture in my head is the Nissan Terra back home. And that it totally unfair. The Brio, with its modern angles, chiseled and stunning proportions, it  its dimensions. Instead it chose to show its performance. The side profile reminded me of the one-make race cars in the All-Japan Touring Car series.  Thanks in part to the rear airfoil and the leading edge front spoiler. Again it is a sporty look and feel, but will it deliver?

The numbers show a pretty good power-to-weight ratio. With three regular fit and one double extra-large shirts in the car, we still got to where we needed to go as quickly as the speed limits permit. But when I was alone, carving the hills of Calauan, Laguna, the RS drove like satisfyingly quick. It was quite precise. Since this was a CVT there was a little lag between throttle push and response on the steep uphills. But with just me onboard, it didn’t run out of breath when properly modulated.

How do you define spacious when you have cargo and crew? That I can only describe as fully loaded. Since the hatch kept all our things in the back, the view to the back was blocked by the Manfrotto bag carrying the lighting equipment. But this time we had a fifth passenger, petite yet still took the space allocated for our rented Canon C100 in its hard case.

To fit her in, she needed to carry the heavy hard case on her lap.  This time we were going up the hills of Cogeo to a shooting site in the grassy fringes of Pililia. Here, the Brio showed some hesitation, but wouldn’t anyone run out of breath, fully when loaded while climbing a rather steep ascent past Kilometer 23—without turning off the aircon. That was for drama though. Turning the aircon off gives an extra bit of performance on the uphills. The Brio didn’t need it. There was hesitation, but not struggle.

When that was over, I give the Brio a pat on the dash—because the task to transport 5 people, with cargo was beyond what it was made for. This is a city car, and it is best in that environment. But having driven the range and the type of terrain it went through makes its performance amazing. Now too,  the measure of space is the ability to not compromise in terms of leg room and headroom. In such a compact package. Awesome. 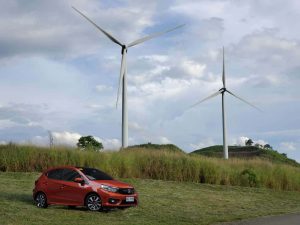 Day Four came from an overnight at Pililia. After a cold water spring shower in a nipa hut just across the Pililia windmills, it was time to drive to Lukban, via Caliraya, the last venue of this particular shoot. This time, it was just three people to the next venue, our heavy lightman assigned to do vignettes with another team.

Spotify kept the 8-inch touchscreen head unit singing. The  6-speaker audio system was spot on, not an overbearing and enough punch to overwhelm both bad singing and road noise from the gritty concrete of Paete on route to Pagsanjan. The morning light on Laguna de Bay was beautiful. And the large windows of the Brio brought all the sunshine in.

The Brio riding and while still is very comfortable. Surprising, because the short wheelbase and short suspension travel, would normally make it bouncy. I said while still because I had camped out in the car with rear seats down and my feet sticking out the right side door. It wasn’t the best sleeping postion, but when you are tired from a thesis shoot anything remotely flat is a cushion.

All that driving delivered something like 11 km/L including the hills. But the drive home which was mostly SLEX was about 20 km/L sedately driving to save the last 5 or so liters to get home.

There is the manual transmission version of the Brio that sells at P585K. Not bad as a starting point for a compact car with a lot of potential—but more so with a lot of proven prowess. I read the articles that poured in after the Brio Baguio test drive, praising the car, and all for good reason—there is very little not to like.

This RS version is priced at P730K and the Blacktop which simply is a black overlay on the roof and nice trims inside is P735K. For the P5,000 difference I’d go for the Blacktop, though the elders around me said that would draw in more heat when parked under the sun. That’s the science there. I am after the passion.