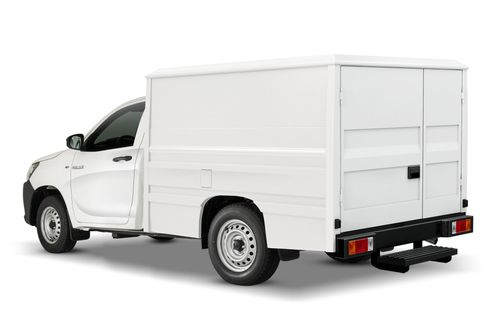 
It won’t win any beauty awards but Toyota’s new Hilux Fleet variants may be the cinder to spark renewed interest in the small footprint transporter in these pandemic times. It can bring in the needed sales volume, more than any of the recently launched Hi-Lux pick-ups. And Toyota Motor Philippines Inc. (TMP) knows this.

Though the spotlight goes to the Hilux 4×4 Conquest and 4×2 Conquest, the G AT and MT, and E MT variants took almost equal acclaim during the livestreamed launch of the upgraded pickup last September 12. And even if little light shown on the commercial vehicle applications, predictably the volume, and therefore, the sales numbers will come from the J, which also has 4×4 variant (presumably for farming and mining clientele) the FX (for people hauling) and the P843,000 cab and chassis.

The Hilux Cargo, priced at less than a million, is what will bring in the bacon. That bacon is delivery services.

The industry is seen to have the most robust growth during these pandemic times will be delivery. Motorcycles are for the narrow roads and limited package sizes. The small footprint delivery truck will be the best solution for bigger or even high-volume cargo.

The Hilux Cargo, priced at P938,00 has no rear seats and is windowless. It’s a cargo box with swing doors and a lock, atop the cab and chassis version.

Yet the value proposition is irresistible. The cost of the rear cargo hold is P95,000 from the price of the frame and cab variant. Now that is about P10,000 costlier than what the bodybuilders from Valenuzuela or Sta. Rosa can weld together. But unlike the aftermarket build, this version has the Toyota seal of approval—having been co-developed with a truck bodybuilder to conform in every way with the fantastically high Toyota build quality, safety, weight, and rigidity standards.

Our source, direct from the partner body building firm for Toyota told Malaya Business Insight that the cargo box is form-stamp-cut, not heat or saw-cut from the standard thickness galvanized sheet metal, that is approved by Toyota engineers. The frame mounting points and even the complex bends that make for the cargo body’s rigidity were all Toyota scrutinized and reviewed. So much research work went into developing the Cargo that it will only be available in dealerships starting October 26.

Two other variants stand out—the FX and the J M/T. The FX comes with a fold-up bench that can seat 15 passengers and has sliding windows. It comes in two versions, one with aircon and one without. We asked Toyota San Pablo what the reason for the variation and the reply was: 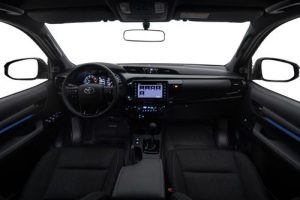 “In some markets, like here in the provinces, buyers prefer no aircon in the rear because of cost and maintenance, as well as space because the air conditioner blower is a bit bulky.” It was also explained that buyers of the non-aircon variant use it more for cargo (about 80% of the time) than to ferry passengers. All that said, the price difference between the more comfortable airconditioned variant is only P28,000—the price of a compressor, evaporator, and plumbing, without labor, in the aftermarket.

Finally, there is the J M/T. Looking every inch like the Hilux, the P952,000 J is the canvas where many new pick-up owners will personalize their vehicles and where many companies will let their field men get the work done. Agripreneurs will look at it to haul their produce from farm to market, while construction companies will rely on the “unbreakable” reputation of the Hilux to haul supplies and equipment.

These commercial-use Hilux variants use the same 2.4L diesel engine as the other variants. Wth 5% Fuel Efficiency Improvement, the 4-Cylinder, 16-Valve DOHC Variable Nozzle Turbo with Air-cooled Intercooler engine produce a more than sufficient 150 Nm at with the crankshaft rotating at 3,400 rpm.

Maximum torque is 343 PS@1,400 ~ 2,800 rpm. The 5 speed MT, Anti-Lock Brake System and Immobilizer are standard. No leather seats, no fancy infotainment system. Just back to the basic equipment that will assure reliable and hardworking transportation.

Then there is the Conquest. The real Hilux upgrade with all the frills and cladding and a 2.8-liter engine for the top of the line version.

Toyota president Atsuhiro Okamoto spoke about both the Hilux and specifically the Hilux Conquest. He said the launch showed that the vehicle was more rugged and exciting than ever.

“The new Hilux is designed to meet the tough demands of Filipino drivers and the country’s varying roads. I am confident that the Hilux would once again prove why it is the Philippines’ pick-up of choice. Tough on every road, every inch a Hilux.” Okamoto added.

The hardworking pickup has 30.5 percent segment share in 2019, a lead that TMP is looking to maintain through the introduction of the world-renowned pickup badge’s latest version.

TMP introduces a new color called Emotional Red, which is exclusive to the Conquest variants as are the bi-beam LED headlamps and LED rear combination lamps with line guide, and sports bar with LED lamps. Other exclusives are the signature Hilux branding on the tailgate which also has a tail gate assist and bedliner, also included are the over fender garnish and Conquest decals on both sides of the cargo bed. 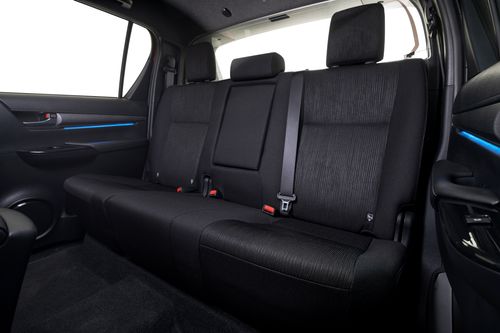 Ingress is smooth and easy with keyless entry available for Conquest, G, and E grades, with Conquest variants getting Smart Entry and Push Start System. All three grades also have power adjust with auto fold for side mirrors and speed-sensing door locks. 4.2” TFT multi-information display, and easily accessible controls with the steering wheel switches and Apple CarPlay/Android Auto compatibility are found on the Conquest, G, and E grades. Cruise Control is found only in the Conquest variants. 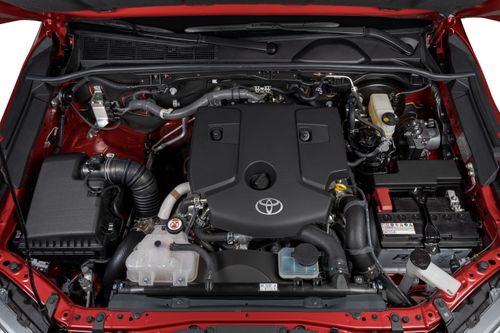 The new Hilux Conquest 4×4 variants are powered by 2.8L 1GD-FTV engine which gives 201 HP (204 Ps) max output, 500 Nm max torque for the AT variant, and 420 Nm max torque for the MT variant with Intelligent Manual Transmission. Meanwhile, the 4×2 Conquest, G, and E variants gets the 2.4L 2GD-FTV engine with 148 HP max output, and 400 Nm max torque. Both the 1GD and 2GD engine are improved for the MC Hilux and enjoys 4-5% improvement in fuel efficiency versus the previous generation Hilux.

The new Hilux can now be seen at all Toyota dealers.