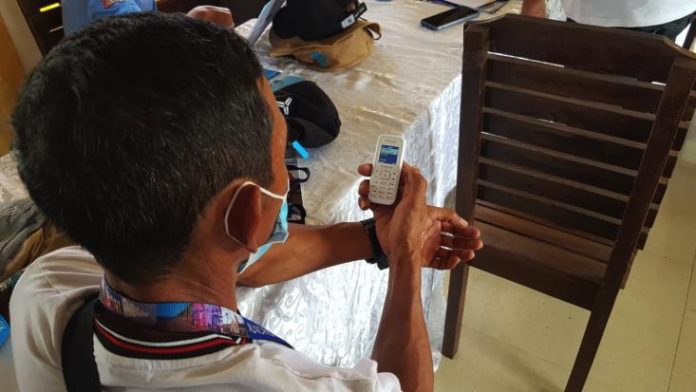 Fisherfolks in the coastal areas of the Philippines can look forward to a brighter and safer year ahead with the development of ISDApp – the community app that allows fisherfolks to access useful weather information to help them plan their trips to the sea, even without a smartphone or an internet connection.

Developed by iNON IT Solutions and powered by Globe, ISDApp collects localized weather data, converts it to simplified weather forecasts, and sends it to the registered mobile numbers of fisherfolks via scheduled daily SMS which includes the crucial hours before they go out to sea.

The launch was primarily a joint initiative between the National Fisheries Research and Development Institute (NFRDI) and Globe, with Dr. Mudjekeewis Santos, Scientist IV serving as its focal person. In partnership with the Bureau of Fisheries and Aquatic Resources (BFAR) Region IV-A, the local government of Sariaya in Quezon was then selected as the pilot community for the project which will run in the first quarter of the year.

“With the country having more than 20 typhoons and tropical depressions every year, we are hopeful that ISDApp will serve as an added tool to aid our fishermen before they set sail. The technology will inform them of the latest weather data and the timely sending of alerts can help ensure their safety,” said Yoly Crisanto, Globe senior vice president  for Corporate Communications and chief sustainability officer.

To use the app, a community leader who will act as the Community Controller installs ISDApp on his/her smartphone which then generates a unique ISDApp community number. Fisherfolks in the area can then register via SMS for free and start receiving weather forecasts several times a day, a few hours before they sail to the sea.

The ISDApp weather forecast includes the date and time of forecast, a simplified explanation of the weather condition, and some tips or reminders.

“Information dissemination is very important in rural areas especially to our fishing communities. With their limited access to sources of information and resources to announce relevant advisories, ISDApp will provide weather forecasts and data in real-time which will be made accessible to underserved communities. In light of the recent typhoons, the importance of timely alerts is very apparent now more than ever,” said regional director Sammy Malvas of BFAR Region IV-A.

The pilot community which will use ISDApp will be a group of 300 fisherfolks from seven coastal barangays in Sariaya, Quezon.

The BFAR is the government agency responsible for the development, improvement, management and conservation of the country’s fisheries and aquatic resources.  The NFRDI meanwhile is the main research arm of BFAR of the Philippines’ Department of Agriculture. It ensures sustainable national fisheries through research and development and aims to raise the income of fishermen. It also aspires to make the Philippines one of the top five producers of fish in the world.

“The NFRDI supports this initiative of iNON and Globe to address the digital divide in rural fishing communities in the Philippines. This pioneering innovation will surely be a great help to keep our fishermen informed and safe in their fishing activities in the coming years,” added Dr. Lilian Garcia, CESO V, Acting Executive Director of NFRDI.

Both agencies will oversee the ground coordination with the Municipal Agriculture Office of Sariaya, Quezon for the pilot. The partnership with BFAR Region IV-A and NFRDI will ensure more communities will benefit from the technology.

Department of Agriculture Undersecretary for Agri-Industrialization and for Fisheries Cheryl Marie Natividad-Caballero also lauded the development of the app, as it is aligned with the department’s vision of having a resilient and food-secured Philippines.

The developer of the app, iNON IT Solutions, became the first Filipino team to win in the NASA Space Apps Challenge in October 2018, with ISDApp as their entry. iNON was awarded as the Global Winner in the Galactic Impact category, besting four other finalists, and thousands of teams around the world. During the early stages of its development, ISDApp garnered support from the Animo Labs of DLSU and the Embassy of the United States in the Philippines. It eventually led to a partnership with Globe.