IT is called the Okavango. Named after a river delta that nourishes the plains of Botswana. It represents vigor, longevity, and abundance in native African culture.

The name is very appropriate for what Geely Philippines newest SUV is—the Okavango—is the brand’s third vehicle to be released here since it was rejuvenated locally in September 2019.  This SUV is a “name re-engineered” version of what is known in China as the Geely Hao Yue, a seven-seater compact SUV sharing the same 190hp powertrain with the recently launched Azkarra.

Distributed exclusively by Sojitz G Auto PH (SGAP) the Okavango, launched in an innovative online media event, is priced at P1.208M for the Comfort and P1.328M for the upper-end Urban variant. 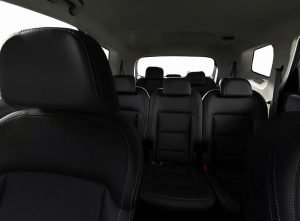 The pricing not only makes it extremely competitive with both its Japanese and Korean counterparts but also throws the gauntlet at the other Chinese brands. Chery, MG, and Maxus have similarly priced SUVs but without the added kick of the 48V Electric Motor Synergy System coupled to a 1.5-liter turbocharged engine.

The Okavango is the third SUV Geely has launched following the popular Coolray and the hybrid genius Azkarra.

“Geely believes that Filipino car buyers are very conscientious and deserve more than what they are paying for. Our buyers’ needs and expectations are our basis on what vehicles to sell in the market, as we continue to level up our brand on a global scale and to eventually become a significant player in the Philippine automotive industry,” Mikihisa Takayama, Geely Philippines and SGAP CEO said.

Joining Takayama at the unique online launch was Geely’s GM for Sales and Marketing Froilan Dytianquin along with Ryan Isana, Manager for Marketing Services. “Coming from the successful launch of the Coolray and Azkarra, we are confident that the new Geely Okavango will be a game-changer in the industry as it combines the best qualities of a multi-purpose vehicle (MPV) and an SUV, into one exciting seven-seater mid-size crossover,” Takayama said during the press launch.

That game-changer positioning first happened in 2009 when Geely bought Volvo. The technology exchange improved both brands and the alliance set forth advances in space and safety engineering that brought Geely’s quality standards to global levels in a very short time. Volvo benefitted from the huge China market but also from practical innovations in powertrains and transmissions.

The Okavango boasts of industry-leading features in terms of space, technology, design, power, and safety. There are 19 ways to fix the rear seat and third row configurations and 42 storage nooks and compartments to lose cellphones, cords and coins throughout the cabin. It also boasts of a triple zone climate control system equipped with a CN95 filter and dual airbags apart from the other active safety equipment, a DNA it shares with Volvo.

These active safety driving features include hill descent control, hill start assist, electronic stability control. Semi-passive security and safety is provided by the standard immobilizer and tire pressure monitor and safety convenience from the rear parking sensors paired to a backup camera. The Urban adds more airbags on the side and instead of just a reverse camera a 360-degree monitor is used.

The Comfort rides on 17-inch rims with 215/60 tires while the Urban on 18-inches with 225/55 tires. Both cars get power to the wheels via an automatic, seven-speed wet-type dual-clutch transmission.

“Our Okavango embodies this energetic spirit with technology, to bring you a cross-over with extended space,” Guy Burgoyne, Geely’s Shanghai Design Center General Manager said. It is now available at Geely dealers.