THERE is no excuse to have a pickup and not use it to haul stuff.

That sort of defined the weekend I had with Ford Ranger Wildtrak. Two days driving to the South, one for a small powwow with family, another day driving around the Taal Lake then Laguna de Bay loops (including checking out some off-road places in rugged construction sites) to check on the fuel economy, and one day before returning it, to haul construction supplies for some changes I am doing to my little hovel. 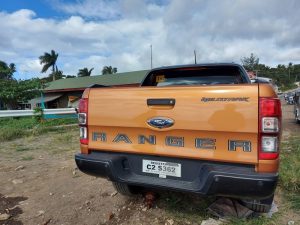 Come to think of it, I’m am sure there is no other way the Wildtrak 4×4 would want to be treated. Sit down dinners, then long drives then back to real work.

After all, the metaphysical existence of the pick-up is on this realm, right? It is fancy enough to drive up to a snazzy hotel lobby and grungy enough to waddle in the mud.

Since this is all going to be about constructive criticism, let me just mention that I am moving back home.

The city is just too much for me and I am giving up my place in Parañaque, which will be up for rent, by the way. I am heading home, like the country mouse, because the rigors of the city are just a bit much. Thus, I have to rebuild a little part of the compound where I grew up, which is my Lola’s place, to something to my liking. That is the reason for the construction.

As for the Ranger Wildtrak, I’d like to start with what’s under the massive bulge up front.

There rests a bi-turbo engine coupled to a new 10-speed automatic. I found good use for four extra gears in the long zig-zaggy drives and stretches. The gears are small enough to keep the engine coupled almost 1:1 to the wheels and retains the revs to its comfort zone. The results are spectacular highway fuel mileage—about 14 km/L. The loopy uphill-downhill roller coaster drives around the lake towns resulted in about 8-10km/L but that is still good, considering the steep climbs.

That being said, the gearbox is sensible and a bit touchy with the downshifts to release the aggressiveness needed to hurdle the hills. The upshifts however are very subtle almost unnoticed. On the inclines there is a lot of perceptible engine braking—a result of however the transmission reacts to the downhills, but that is on the road. Also whenever I lift my foot off the pedal there is a slight deceleration, again noticeable only if you pay attention.

The last Wildtrak on my test drive list had a 3.2-liter inline-5. It is easy to understand why replacing it with the 2.0-liter bi-turbo is a good move. The 213 horsepower and 500 Nm of torque is close enough to the bigger engine but the gearbox compensates. The FYI here is that it is the same engine found in the Ranger Raptor, (which will be excitingly, the next test drive vehicle in the list) thus the genetics make the two cars almost the same, well sans the big wheels-and-tires and the Fox suspension. But the X chromosomes are there, and that’s what’s important.

Someone, somewhere said that the Ranger is not the kind of vehicle you take on a winding mountain road for sporty thrills. Of course, not. Given its proportions, it was surprisingly nimble, and the cornering is not that bad. Not super precise, not extra sensitives. Its Y chromosome is utilitarian so I forgive some body roll, the bouncing over road cracks, potholes, humps, train tracks, coconut trunks similar obstacles.

Upfront, the comfort levels are on par with some passenger cars with the added excitement and convenience offered by the tall ground clearance. In the rear however, as is with most pick-ups, the leaf spring bounce is felt, unless there is a payload that tempers the boing. The front seats are supple, firm and comfortable. Those in the back are flat and are void of side support, they are quite vertical, which is the compromise with any crew cab pick-up. Engine noise is suppressed, wheel noise is acceptable, but wind noise is a bit high, again no pick-up can say total quiet as the aerodynamic coefficients is the same as that of a box.

In a portion of the 7.5-kilometer strip of unpaved road that will connect San Pablo, Laguna to Tiaong, Quezon to complete the South Luzon Expressway Toll Road 4 (From Sto Tomas, Batangas to Lucena) I was able to test 4H (four-wheel drive high-range) and 4L (four-wheel drive low-range). 4L easily overwhelmed patches of mud and the highly inclined uphill and downhill sections currently being paved over by back hoes. 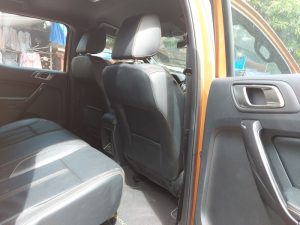 The Hill Descent Control is a satisfying inclusion, given the fact that this Wildtrak ran on all-terrain tires. That gave the feeling of security in this extreme situation. Though I had no time to test the 600 -800 mm wading depth because the Umiray River wasn’t inundated enough, I did check out how the 28 degrees approach and departure angles plus the 25-degree ramp angle fared in the construction of the overpasses in the Alaminos, Laguna construction site.

Now back to my own construction.

Had ordered a decent amount of construction materials including 4 lengths of heavy plyboard, 4 lengths of cement boards, 30 pieces of hollow blocks, 8 bags of cement, steel matting, 16 boxes of 18 x 18 inch floor tiles, and various other items. After laying a sheet of folded “trapal” in the cargo bay I had the stuff loaded. Now if I owned this Wildtrak, I didn’t need a covering because it comes with an excellent bed liner. But wanting to protect this borrowed car, the double-layered canvas was there to ensure all scratching and scathing would be absorbed.

Now that load was not a ton, but it was a lot for the rear cargo area. The fastening appendages around the bed helped hold the cargo. I even had pieces of metal bars, in 20 foot lengths but I left that the hardware store’s delivery truck to haul. When those construction supply geniuses arranged all the materials in a puzzle like fashion, it is amazing how much the rear cargo bed could fit in.

Here are the specs for that cargo place;  1,560 mm wide (minus about 3 mm each side because of the bedliner,)  by 1,549 mm long with the bed depth of 511 mm. The spec sheet says that can load over 1,000 kilos of payload, I estimated the first haul to be about 400 kgs. It has a towing capacity nearly a ton 750 kg for normal pull trailers and 3x that capacity for ones braking apparatus. 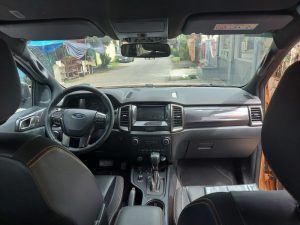 I do have to mention that the Ford’s Infotainment system is tops? Easy to operate, extremely intuitive and flexible, the sound system and the excellent air conditioning took the heat off the long wait while the truck bed was being loaded.

The Ford Ranger Wildtrak 4×4 is an excellent proposition and it is not hard to see why other car experts like Carguide.ph and Autodeal.com have given it great ratings. The balance between car-like features, real hauling capacity and capable off-road performance give it the same aura as that of an all-around workhorse. Unlimited by its utilitarian genes, the luxurious interiors and long list of safety and convenience features, given the P1.695M price tag presents a truly strong value argument—one that is very positive and constructive.