Concepts are true previews from auto show turntable to your driveway 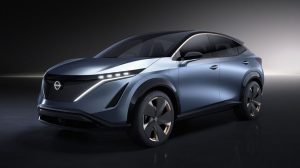 SOMETIMES, the point of a concept car is just to explore a concept. It can showcase blue-sky thinking about a future world with technology that’s more science fiction than reality. Concepts can also give us a glimpse of design studies freed from real-world limitations, sparking a sense of wonder.

But Nissan has also developed a number of cutting-edge concept cars over the years that eventually made the jump from auto show eye candy to customers’ driveways.  From best-selling crossovers to the latest in electric vehicle technology, here’s a look at Nissan concepts from the past decade – and a peek at the next EV crossover on the horizon.

The latest concept to become a reality is the “tough but sophisticated” Nissan Xmotion, seen in production form as the all-new, third-generation Nissan Rogue. The concept took inspiration from Japanese culture and traditional craftsmanship and fused it with Western-style utility. In production form, the all-new Rogue takes those cues with a design that is adventure-ready for the whole family. Perhaps the most interesting transformation was the evolution of the singular boomerang headlights of the concept into two separate lighting elements. And while the rear-hinged rear doors of the concept didn’t make it to production, the new Rogue’s rear doors open nearly 90 degrees, making it easy for passengers of all ages to hop in and explore.

As a concept, the Nissan Resonance unveiled dramatic styling features that would become hallmarks of Nissan design for years to come. The V-Motion grille stood out prominently on the concept and the small black portion near the upper rear section (D-pillar) led to the “floating roof” aesthetic that has carried through to not just crossovers, but even the most recent Nissan sedans, such as the Versa and the Sentra.

The third-generation Nissan Murano adopted the concept’s essence, along with the boomerang headlights and floating roof. One big standout in the production Murano was the interior, which arguably went beyond the promise of the concept.

Though it took two years for the production version of the Nissan Kicks to debut after the concept was revealed in Sao Paulo, the level of design and detail retained was well worth the wait. Both concept and production models even shared similar two-tone color schemes, grey on the body and orange on the roof – inspired by Brazil itself. Launched first in South America, the Nissan Kicks has gone global to many other markets, and is embraced by car buyers who love its size, value, tech features, great utility and the ability to really personalize the vehicle to their tastes.

When the first-generation Nissan JUKE was launched in 2009, it turned automotive styling to maximum volume. To preview the second-generation model, the Nissan Gripz Concept turned up the dial to 11. The crossover concept’s exterior was designed in Europe, while the motorcycle-inspired interior was developed by designers in Japan.

The global effort came together seamlessly in the fall of 2019, when the all-new Nissan JUKE debuted simultaneously in six European cities. Press and customers applauded JUKE’s amped-up style, upscale interior and advanced tech features – from ProPILOT and NissanConnect to the Bose Personal Plus sound system, with speakers integrated into the driver’s headrest.

Some concept cars can foretell more than just looks. The Nissan IDS Concept promised a different vision of tomorrow, one where your electric car not only handles well but can also take over the car’s performance when selected, imitating the driver’s own driving style and preferences.

When the new Nissan LEAF debuted two years later, it ushered in a new driving experience with its ProPILOT and e-Pedal technologies, new styling inside and out, more personalization features to tailor the EV experience for each driver, and enhanced connectivity. The award-winning ProPILOT system helps drivers control the distance to vehicles ahead and keep the car centered in its lane, and can help activate braking when necessary. e-Pedal allows the driver to control acceleration and deceleration with just the accelerator pedal, making driving less stressful.

Nissan has been a pioneer in mass-market electrified vehicles beginning with the first LEAF electric car, then the e-NV200 electric van, and later the best-selling e-POWER models – Note and Serena. Now, the world is looking for a leap forward. The Ariya Concept answered the call with its rethinking of the crossover segment from the ground up, including striking design features, interior amenities and space and sports-car-like performance. Even a conventional element like the traditional front grille has evolved into a stunning “shield” to protect important technology used for the latest in ProPILOT driver assistance.