Honda Motor Co., Ltd. announced its motorsports activities/teams for the 2021 season and initiatives to expand the popularity of motorsports.

Since the days of its founding, Honda has been strengthening its technologies, human resources, and organizations and sharing the fun, joy, and inspirational experiences with many fans and customers by competing in various races.

In 2021, Honda will continue to compete in the most prestigious motorcycle and automobile races in the world, including plans to compete in various races in different categories in Japan and in other regions around the world.

Striving to share dreams and inspirations with people as the world continues to be in the fight against COVID-19 pandemic, everyone involved in Honda motorsports activities, including riders, drivers, engineers, mechanics and other team members, will work as one “TEAM Honda” and compete with full force.

In the 2021 season, Honda will compete with the factory teams operated by Honda Racing Corporation (HRC) and strive to win the championship in the Dakar Rally 2021 which is currently in progress, in the premier classes of all three categories of the World Championship–road race, motocross and trial – as well as the FIM Superbike World Championship. In addition to factory teams, with excellent satellite teams, Honda will compete in the FIM Endurance World Championship and the FIM World Championship of the American Motocyclist Association (AMA) Supercross Championship. Moreover, in Japan and many other countries and regions, teams formed by local Honda subsidiaries and dealers will participate and strive to win championship titles in the road race, motocross, and trial categories.

As a new initiative starting this year, Honda will begin the Honda Superbike Challenge Program, designed to support riders who compete in road race championships around the world to further advance themselves. As a part of this program, Ryo Mizuno who competed in the JSB 1000 class of the MFJ All-Japan Road Race Championship last year with MuSASHi RT HARC-PRO.Honda team, will begin competing in the British Superbike Championship this season. 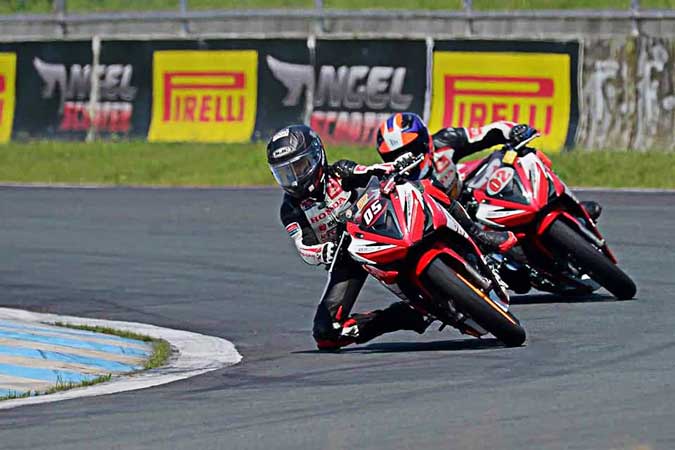 Teams competing in the SS600 and AP250 classes will be announced as soon as details are finalized.

In the area of motorcycle racing, in 2016, SRS-Junior was renamed as SRS-Moto, and its rider development system and curriculum as well as the machines used in the program were renewed so that they are geared toward the development of riders who can compete at the level of world championships such as MotoGP.

Honda initiatives to expand the popularity of motorsports

Honda has been making active efforts to expand the popularity of motorsports. In order to convey the fascination of motorsports to a broader range of people, Honda has been conducting various events and activities including ones that can be enjoyed more casually by those people who are not yet so familiar with motorsports.

HRC is hosting various one-make races a year at approximately 30 circuits throughout Japan under two categories of races with different purposes — to simply enjoy motorsports and to foster future MotoGP riders.

The one-make race series are being held at a number of circuits throughout Japan. In addition, HRC has been hosting some Japan-wide races (at Suzuka or Motegi) for riders who fulfill certain conditions and offering support for riders to step up through training classes. In other words, the HRC one-make race series have been a stage where participants can enjoy the races and/or strive to realize their dreams.