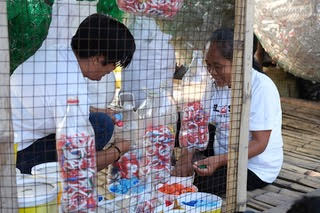 COCA-COLA has been steadily contributing to collective action as it leverages on its expansive scale. The company announced its World Without Waste global vision in 2018: an ambitious goal to collect and recycle every single bottle and can it sells by 2030.

All of Coca-Cola’s primary packaging in the Philippines, from returnable glass, to PET plastic bottles, and aluminum cans, are 100 percent recyclable. The iconic Coca-Cola glass bottle which represents approximately 50 percent of the company’s total business in the country, with many found in sari-sari stores in far-flung areas, are continuously collected, washed, and reused in a virtuous supply chain cycle.

The company has also implemented light weighting of its PET plastic packaging, resulting in a huge reduction in its plastic consumption but still ensuring the same top quality of its beverages. Packaging for single serve (500ml and 330ml) Wilkins and Viva are now approximately 20 percent lighter.

Launched in June 2019, Viva! mineralized water is the first brand within Coca-Cola’s portfolio to transition toward this packaging redesign. In September 2019, the Company transitioned its green Sprite packaging to clear PET and also offered the lemon-lime carbonated drink in bottles made from 100 percent recycled plastic. This is aligned with the roadmap to increase the recyclability of its packaging—as clear bottles have the highest recyclability rate compared to others.

Located in General Trias, Cavite and set to be operational by the first quarter of 2021, PETValue will employ the safest and most advanced technologies to process used PET plastic bottles—thereby allowing an endless loop of recycling. Its projected capacity, or the amount of used plastic bottles it can process, is 30,000 metric tons of PET bottles per year, or equivalent to approximately 3 billion bottles.