For decades, switching on the Christmas lights along Ayala Avenue in Makati has signaled the beginning of the festive holiday season. The entire stretch, illuminated by beautiful ornaments and installations, often highlighting Filipino craftsmanship and tradition, has captivated both local residents and visitors.

This year’s design features Christmas trees and angel wings—elements that are more than just pretty displays that mark the holiday merriment and festive celebrations. 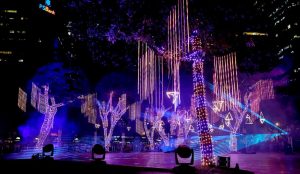 Local materials and products will also be promoted through details and decors that showcase abanico-shaped installations and Capiz chandeliers, as well as solihiya and adarna feather patterns, which all signify the rich heritage of Filipinos.

Watch out, too, for the Festival of Lights, giant lanterns, and 3D video mapping at Ayala Triangle Gardens.

Over at SM by the Bay Mall of Asia in Pasay City, see one of the country’s tallest and “safest” Christmas tree.

The Firefly LED Giant Christmas Tree at SM By the Bay has a “Home for the Holidays” theme with red and gold colors.

The tree is adorned with gift boxes, candy canes, Christmas balls with angels and snowmen, and covered with Firefly LED Bright Christmas Lights.

To supplement the grandiose Firefly LED Christmas tree, SM By the Bay, has also installed “Christmas Forest of Lights” featuring 30 8ft forest trees with light synchronization to be displayed until January 2020.

Aside from SM By the Bay, Firefly LED also lit up the 75-ft Christmas tree at SM North Edsa with a “Frozen” theme, a parol-inspired tree in Ayala Cebu, and an indoor Christmas Tree at Robinson’s Tagum.

If you are an LRT user, fret not.

With the theme, “Christmas In Our Homes,” three light rail vehicles (LRVs) were adorned with three-dimensional decals to make the interior look and feel like traditional and modern Filipino homes.

The LRT-1 Christmas Train which showcases puzzle slides and other interactive wall activities will run until February 2020!