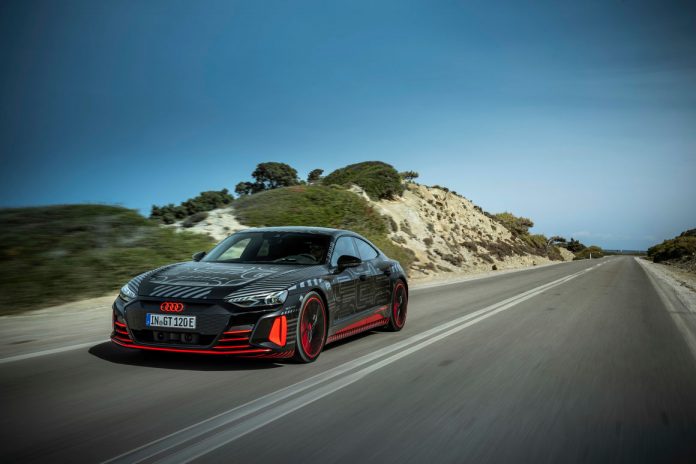 TRACK testing. Two words that strike fear in the hearts of car designers and engineers.

Nothing on the drawing board usually comes out 100 percent right when on the track but on this particular day Audi designers and e-tron GT developers, Dennis Schmitz from Audi, Jaan-Mattes Reiling from Audi Sport GmbH and Christian Schröder from development partner PSW, an Audi subsidiary were particularly confident.

“For us at Audi Sport, the production-based Audi RS e-tron GT is the first step into the fully electric RS world. With it, we’re also delivering on our promise of launching future RS models soon after the base models. This is high-performance in the team and in the product,” Julius Seebach, Managing Director of Audi Sport GmbH said.

Onto Neuburg an der Donau on a the late-summer day with Formula E driver and champion of the 2016/17 season Lucas di Grassi who now has the opportunity to drive the fully electric Gran Turismo as an RS model on the test track. For Schmitz, Reiling and Schröder, it marks the moment of truth: in the driver’s judgment, will the production-based RS e-tron GT achieve the objectives they pursued?

Lucas di Grassi is a pro all the way – both at the wheel and off the race track. The native Brazilian, now living in Monaco, has been driving for Audi since 2012.

In 2014, he won the inaugural race of the then newly launched Formula E, followed three years later by the title win with Audi Sport ABT Schaeffler. On 32 occasions, di Grassi stood on the podium for Audi in the past six years, which makes him the most successful driver in the electric racing series.

The e-tron is Audi’s realization of a production car with a fully electric sports car heart.

But the professional racer’s thinking goes far beyond motorsport, too.

Lucas di Grassi is an international UN ambassador for clean air, so technological innovation and sustainable climate protection are a natural pairing in his book. Needless to say, the technology enthusiast from Monaco has a strong interest in Audi’s next electric car project, the e-tron GT.

After the first few laps around the track di Grassi was thrilled.

“The car is fun! Obviously, such a Gran Turismo is totally different from a race car. Even so, there are plenty of parallels, especially the powerful acceleration which, just like in our case, is fully available for a long time. From zero to a hundred kilometers per hour in clearly less than four seconds, and even continuing on the fifth lap – how did you do that?” di Grassi asks Christian Schröder.

“As you know, you need powerful thermal management for high and reproducible output. In the e-tron GT, we have two coolant circuits for the technical components operating on different temperature levels. The cooler one controls the temperature of the high-voltage battery and the warmer one serves the electric motors and power electronics. Plus, there’s a cold circuit and a heating circuit for the interior, which I suppose your race car doesn’t have,” Schroder replied.

The cold circuit is a simple idea with a complex execution. It’s primary purpose is to keep the electric motors operating at optimum temperature. Too cold or too hot the energy generation (in terms of torque) is compromised.

“We can flexibly interconnect these four circuits via valves, for instance, as a highly efficient heat pump for the interior. However, the cooling of the high-voltage components under high loads and the cooling of the battery during fast DC charging processes are, no doubt, the most challenging requirements. After all, we reach output levels around 270 kW here that generate quite a bit of heat,” Audi’s project lead for the eTron Schmitz explains.

No strange to electric tech

Tech is no stranger to di Grassi so he appreciates the sophistication of the system and the power management innovations on the e-tron. He compares it to his racing car.

That’s…even more innovative than my Formula E race car. Obviously, temperatures in Formula E are even more extreme. That’s why we actively cool the battery down below the outside temperature during the charging process using dry ice. In this way, we gain more latitude with the system temperature in the race, because that’s when we heavily stress the powertrain by constantly changing between flat-out driving and recuperation. Obviously, this heats up the battery and costs energy. The more extreme the conditions, the more I have to pay attention to efficiency and management of my energy supply so that I’ll still have enough power left on the final laps,” di Grassi comments.

“Prediction is important in our case, too, albeit on a different level. We use a special functional feature to ensure that the driver can charge the battery with utmost capacity during a trip,” Reiling explains.

And what is the practical use of this innovation?

“When the car travels a longer distance with active navigation, the e-tron route planner issues suggestions of where to charge the battery. About half an hour before the car arrives at the selected charging station, the thermal management system starts adjusting the temperature of the battery to precisely match its state of charge and the charging station’s capacity,” Reiling explains with precision.

“The production-based Audi RS e-tron GT is a milestone for us. It paves the way into the all-electric RS world and it is our commitment to the company’s CO2 target,” Seebach said emphasizing the development of brand’s newest car.

When using digital twins the development process becomes very lean, with fast decisions using short channels. Led by Audi, PSW took over an important part of the work. Audi Sport GmbH was responsible for the suspension setup – and is rewarded with great praise for it by Lucas di Grassi.

“What I particularly like is the car’s handling. Well, you’re saying that, as a Gran Turismo, the car also has to deliver good ride comfort. For me as a race driver, that’s not such a key characteristic. But I must say that the car’s grip and precision in cornering are definitely very impressive,” the Fomula E champion said.

“Thanks, Lucas, I’m glad to hear that!” Reiling exclaimed as he explained how during the development his team tried to merge all the strengths into a consistent overall picture. And in terms of technology, draw on ample resources to achieve the results.

“For instance, the three-chamber air springs are the gold standard in their field. They enable soft basic suspension comfort, provide us with greater degrees of freedom with the setup and can adjust the body to various ride height levels. But, most importantly, they perfectly interact with the controlled dampers. Both systems are managed by a central chassis control system and can be controlled in several modes via Audi drive select. Obviously, we selected the most aggressive program for you,” Reiling said.

“In the e-tron GT, our customers can practically get all the state-of-the-art technologies available today. They also include all-wheel steering with which the rear wheels turn in – opposite to the front wheels at low speed for enhanced dynamics and in the same direction at higher speed for the sake of stability. Front-wheel steering has a sporty-direct bias but without an acute ratio. This is another typical characteristic of our Gran Turismo philosophy,” Schmitz added.

Di Grassi praised how the e-tron GT prototype delivers really good braking performance which he described as “strong and precisely controllable.” No mean development feat for an electric car of that size and proportion.

“Well, you drove the production-based RS model with the carbon fiber ceramic brake discs – they, too, are among the best that’s available. The e-tron GT comes with steel discs as standard equipment. Discs with a tungsten carbide coating for enhanced performance are an available option. Plus, we probably put the car on the most beautiful wheels ever seen at Audi. I find the large 21-inch wheels to be the most fascinating ones due to their stunning design and sophisticated manufacturing. The 20-inch wheels are the best in terms of aerodynamics and the 19-inch wheels at the front weigh only about 12.5 kilograms each. This yields real handling benefits and, above all, advantages in terms of consumption and range,” PSW’s Schröder said.

Unlike in the ICE version of Formula One, there is no pitstop for refueling. The races run 45 minutes plus one lap. When battery technologies were still in the infancy stage for races, drivers switch cars. With the introduction of the Gen2 car, the battery lasts for the full race.

Having experience racing with a fully electric car, di Grassi has a keen interest in energy consumption. Not only in his job as a race driver in Formula E but also in his role as a forward thinker in climate protection through innovation.

In this context he espouses the same philosophy as the Audi Group. How did he do it?

“At the beginning of the 2010s, I helped get Formula E off the ground because it was clear to me that the future would belong to electric cars – both on the road and on the race track. And the further this development progresses, the more speaks in its favor,” di Grassi responds.

“Well, we’ve been sharing a joint success story with you for several years now. In 2017, we were the first German manufacturer to enter Formula E with a factory-backed commitment in order to show how dynamic, fascinating and emotional electric driving can be,” Reiling adds.

The future of mobility and racing

“Motorsport also benefits the development of our production cars and that’s where we’d like to spearhead the transformation. By 2025, Audi will launch some 30 new electric cars and plug-in hybrid models and electrify every model range in the process. Obviously, electric mobility is truly sustainable only with clean electricity. Sustainability is our claim as well as an absolute necessity for our continuing success,” Schmitz shares.

Electric mobility is the right path toward the future of electric mobility – provided the electricity it uses comes from renewable sources. At the United Nations, di Grassi is an ambassador for clean air and in Brazil, he has been dedicating his activities to new technologies as an entrepreneur. In his native São Paulo, he initiated the “Zero Summit” technology congress.

Schröder asked di Grassi about it.

“You get around the world quite a bit and are also familiar with the environmental issues on other continents. In 2019, you traveled to New Delhi for the United Nations and filmed the “The Race for Clean Air” documentary there. What was that all about?” Schröder asked.

“I wanted to inspire a particular thought to instill courage in all of us. New Delhi is one of the cities with the highest air pollution – and if solutions for better environmental protection can be found and applied there, then it’s possible anywhere. There’s no doubt in my mind that sustainability has to be based on technology and innovation, because sustainable solutions will only gain traction if they’re not just a compromise but also the better solutions,” di Grassi explained.

The RS in Audi’s life

“The RS models are Audi’s sportiest and most emotive models with the most powerful engines, highest dynamics and greatest driving pleasure – and all this combined with absolute everyday usability. With the RS e-tron GT prototype, we’re transferring these characteristics into the electric age. This is a revolution for us in the high-performance segment,” Seebach confides as he elaborated on how the Audi e-tron GT conveys the brand’s image in a highly emotive way and serves as the basis for its first fully electric high-performance model.