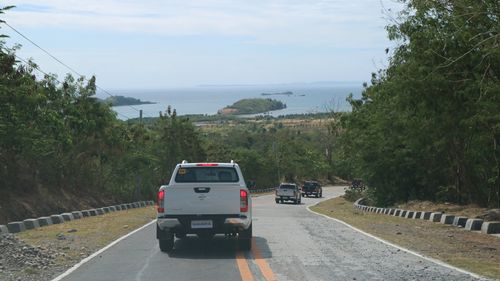 Two provinces, one mountain, one beach. These basically sum up the destinations of our drive last week using six Nissan Navara pick up trucks which now boast of new safety features and modifications.

Our group of about 16 motoring journalists took a very early morning flight from Manila to San Jose, Mindoro Occidental on a Monday. As soon as we arrived at the airport, we took the wheels of the Navara  assigned to us and drove to a restaurant for breakfast. At the briefing, Nissan Philippines,  Inc. president  Ramesh Narasimhan welcomed us in the event which is part of the third year anniversary celebration for the Navara. He said the drive would enable us to experience the Nissan Intelligent Mobility which has been integrated in the 2018 Navara, the third Nissan vehicle to have such feature after the X-Trail and Patrol Safari Royale.

The main objective of the drive is to conquer a part Mt. Malasimbo, one of the three popular peaks of both Mindoro Occidental and Oriental, the others being Mt. Halcon and Baco. Mindoro is part of the MIMAROPA region which consists also of Marinduque, Romblon and Palawan.

The drive was both a quick lesson in geography and the new  Nissan smart features. The Navara is powered by a 2.5 L diesel engine with VGS Turbo with 190 horsepower and 450 Nm of torque and the first and only pickup with 7-speed automatic transmission. Aside from being powerful and efficient, the Navara engine is said to have low friction components that prolong engine life , thus reducing oil change frequency and other maintenance costs.

As we drove and rode through 11 municipalities of Occidental Mindoro on various terrains, we found the multi-information display handy giving us details that we need with some clicks at the monitor. Of course, it also displays the Intelligent Around-View Monitor or AVM which found very helpful when parking and when negotiating very tight space as would also find out during an off-road drive in the mountain.

It was a long drive with some breaks along the way to allow for driver changes and rest. Ramesh joined us in one stretch of the drive and having joined two previous Navara drives in the past- the Paoay Sand Dunes Challenge in 2016 and the Pagudpud, Drive last year, both in Ilocos Norte, I said this type of event for the Navara seemed to be a tradition already.  Ramesh said it is developing to be one and this drive would again showcase the capabilities of the Navara and its new safety features, top of which are the AVM, Hill Start Assist and Hill Descent Control, among others. Ramesh initially showed us how the AVM worked.

From the South, we were now entering the North and seeing the welcome sign in Calapan City, I said we were now in Oriental Mindoro which has 14 towns and a city. We did more mountain passes and eventually passed by a beautiful waterfall in Puerto Galera. At a rest stop, we had a good view of the white beaches, Verde Island and Batangas across the sea.

We resumed driving and in half an hour, we were already going up the trails of Mt. Malasimbo, our destination on the first day. We were just in time to reach a flat portion to park our vehicles and catch the sun setting down.

As darkness fell, we proceeded on narrow trails to Camp Navara, the same name adopted by NPI in Sagada in 2016 (which I missed) and in Pagudpud last year. Here a “tent city” with around 20 tents from Coleman welcomed us. We were going to sleep in the mountain. While the flat lands had about 29-31 degrees temperature, here we were expecting a cool 21.

The tents had air beds, blankets and pillows inside plus a portable lamp and a folding chair. A cultural song and dance by the local Mangyan children followed and we had a sumptuous dinner prepared by the resort. We also had a bonfire on a stage to give us warmth and get a taste of toasted marshmallows and some drinks before calling it a night. The more apt term was glamping or glamorous camping as I understood it. It was always a welcome activity for this writer as it reminded of my youth during camps in Mt. Makiling and in some Batangas beaches. Ramesh and NPI executives Rolly Concepcion, Dino Obias and Cyrus Macasera were my immediate neighbors in the camp.

A good sleep and a good breakfast were all we need to engage in a solo off-road drive guided by veteran racer and instructor Georges Ramirez. Georges made use of the camp’s and the mountain’s natural terrain to demonstrate the off-road features of Navara. The AVM camera system allowed the vehicle to use four cameras (installed in front, rear and on side mirrors, providing a 360-degree view of the vehicle from above. It is like having an aerial view of the Navara allowing the driver to avoid obstacles like fallen tree trunks and big rocks and dangerous trail sides. For ordinary vehicles, going uphill or downhill where one does not see what’s ahead, the AVM gives the driver not just the front view but all angles of the surroundings.  The AVM operates only on very slow speed and is meant to assist the driver in negotiating very tight space and in parking.

The Hill Descent Control was also aptly demonstrated when we took a steep downhill and enabled us to let the DHC control the vehicle’s descent.

The Navara 4×4 capability was further tested as we drove through slippery surface brought about by the rains earlier.

Soon we left camp and we were driving for another half-hour to reach the Infinity Resort and Spa in Puerto Galera. From Mt. Malasimbo, we were now in a luxurious resort by the beach.

We capped the three-day event by driving back to Calapan this time to the port and board all vehicles and us in a Fast Cat to the Port of Batangas, a good two-hour boat ride.