A third “pawikan” nest was discovered at the Aboitiz Cleanergy Park in Davao City, reaffirming the park’s status as a sustainable environmental haven conducive to a variety of wildlife. 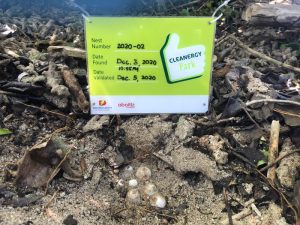 Since its launch in 2014, the Aboitiz Cleanergy Park has released 4,811 hatchlings from 40 discovered nests within the area, and at present five rescued pawikans are in the park’s repository (three Hawksbill turtles, one Green Sea turtle, and one Olive Ridley turtle).

“This is very commendable considering that Hawksbill turtles are considered as critically-endangered among the five marine turtle species in the Philippines. We commend the Aboitiz Foundation and the Davao Light and Power Company for their unending efforts in protecting the nesting sites of marine turtles as well as their conservation initiatives in order to increase the pawikan population in the area,” said Bagani Evasco, Department of Environment and Natural Resources (DENR) Region XI executive director.

“Indeed, our forged partnership with the Aboitiz Foundation has come to fruition in protecting and conserving marine turtles in the middle of the city,” Evasco added.

The nest’s discovery was unforeseen as pawikan nests are not expected to be discovered this year (they are discovered every other year). The park’s environmentally-sound and protected status, coupled with decreased activity in the area brought about by the city’s community quarantine, may have attracted nesting pawikans to lay eggs in the area.

“Pawikans are already endangered and initiating conservation efforts that will make them stay for the future generations is one of the things we value the most as we contribute to keep the balance of nature for a more sustainable environment. Davao Light, in partnership with Aboitiz Foundation, DENR, and the local government unit (LGU) of Davao City will continue our conservation efforts to build a better world for the pawikans,” said Rodger Velasco, Davao Light president and chief operating officer.

During the ongoing community quarantine brought about by the current pandemic, Davao Light and the Aboitiz Foundation continued their rehabilitation of the park’s facilities that were destroyed by waves from last year’s “habagat.” New repositories were also built to provide rescued pawikans with a better place to recuperate from their injuries while waiting for the best time for their release back to the sea.

Davao Light, the Aboitiz Foundation, DENR and the Davao City LGU previously entered into an agreement for pawikan conservation efforts and identified the Aboitiz Cleanergy Park as Pawikan Rescue Center, in support of the United Nations Sustainable Development Goal 14 (Life Below Water). This aims to address the dangers of poaching and the impacts of other human activities on the pawikan species.

Any rescued pawikans are turned over by DENR to the park for proper care and assessment prior to releasing back to the wild.

Lyceum won’t get in players’ way