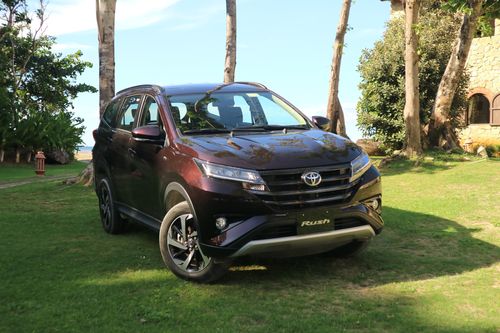 The Toyota Road Trek,  Toyota Motor Philippines’ test drive and fun event for the motoring media, is now on its 14th year and continues to get better and more exciting.

As in most road trek editions when participants were kept clueless on the destinations, TMP also kept us guessing as to where we would drive this time. I missed only one road trek and in the past, participants who engage in friendly mental and physical competitions have driven to most regions in Visayas and Mindanao.

What other top destinations which the road trek has not been to?   TMP has made it a point for the trek to have land, air and sea to keep the tradition of its trek. Finally, three days before the event, we were informed that the exclusive and most talked about Balesin Island would be “it” this time sending some adrenaline rush especially for the first-timers, this writer included.

But there would be challenges on the first day.  Even the car assignments created a kind of rush as many of us hoped that we would get a chance to drive the new Toyota Rush, the Company’s recent entry in the subcompact SUV segment.

We got our wish of getting on board a Rush five-seater manual on the transport stage which brought us from Trinoma in Quezon City to  Toyota Angeles in Pampanga. I was a passenger and it was my son, Ronald, a member of another team who drove all the way to Angeles City. I felt comfortable in the rear seat and I noticed that there were also airbag signs near the windows of both sides. So these must be the curtain air bags which are now part of the safety features in the new Rush. Ronald said the manual transmission was car-like and he enjoyed the instant response from the Rush’s 1.5-L Dual-VVTi gasoline engine whenever he would make the shifts. We maintained a 100-km per hour speed at NLEX and in no time, we reached Toyota Angeles.

After breakfast, we were asked to pick our teams’ colors which for us was  pink. We then engaged in the challenges consisting of quizzes, handicraft-making and photo contests with catchy and fun captions to be posted in social media with hashtag #ToyotaRoadTrek2018.

Next, we headed to the Souq Restaurant in nearby San Fernando. This time, we had a Rush 5-seater with automatic transmission. The other teams drew the Rush 7-seater, Innovas and Fortuners. TMP took time to  unveil the new Alphard with much more luxurious and elegant edition of the van. Here, we also engaged in photo shoots for entry in the contests.

Cristina Arevalo, TMP first vice president for planning- vehicle sales operations,  welcomed us.  She said, “the drive to Central Luzon is just a teaser of what awaits us in Balesin Island.”

It was my turn to drive from San Fernando to Balanga, Bataan which is approximately 70 kms.  Although there was no eco run for the event, I decided to do one just to find out what would be my best mileage. We were in a convoy of more than 10 vehicles. I was third behind the lead car and just we followed the flow of traffic on Gapan-Olongapo Road then on to Roman Expressway.  My teammates, Jong Arcano,  Ardie Lopez and PJ Cana, all from the Philippine Daily Inquirer, were all asleep when I checked on them. Was it the cool airconditioning of the Rush or my smooth driving or the sumptuous lunch we had earlier that easily put them to slumber? Maybe all of the above.

I kept on checking the Rush’s fuel average meter and from 12.8 kms per liter when we started, we achieved a 15.2 kpl as we neared  Toyota Bataan. Very promising for a future ecorun.

The dealership is among the three newest opened by Toyota recently to complete their huge 65 dealer-lineup. The team challenges continued and we were thankful that 95 percent of our activities were held indoors giving us time to also appreciate the  spacious, world-class customer-friendly Toyota facilities.

Next we drove back on the highway and on to SCTEX and for the day’s final challenges at Toyota Tarlac, the third new dealership.

After completing the tasks, we headed to Hotel Midori at Clark where we would spend the night before taking the 35-minute flight to Balesin Island the next day..

Balesin is beautiful from the sky and more so on the ground. It is an island on Polillo town in Quezon province, some 100 kilometers south of Manila. If you drive from Manila, it will take you three hours to get to Real and then another three hours to get to the island by boat.  So taking the plane was the most convenient way of getting there. The island has some 1,000 residents and Alphaland, the developer, employs some 700 people on its 500-hectare property. Aside from the airport and hotels, the island has its own water reservoir,  electric generators, and a track and football oval.

We were shuttled to the French-themed Saint Tropez for our accommodation. I couldn’t help but take photos of the sea and the swimming pool from my window. Then we had lunch at Mykhonos at the Greek architecture -nspired village.

TMP roro-ed four units of the Rush to the island so we could also drive them and take more photos. We went for a sunset view in late afternoon and the pictures were just amazing. Of course, it was so relaxing to just have drinks and cocktails by the sea.

We spent day three our free day driving and shooting the Rush. With Balesin’s unpaved roads, we still felt comfortable and enjoyed the Rush in rally-like terrain.

We also engaged in activities like horseback riding, swimming, biking or working a bit to meet some deadlines. I opted for archery and table tennis which I thoroughly enjoyed at the Sports Center.

It was also good to try out various cuisines in the Thai, Indonesian, Italian and Spanish villages all of which have good views of the sea.

Another rush came during the awards night where we would know the top three teams who garnered the most number of points in the challenges. We waited in suspense as winners in the photo contests were announced.

Finally, Team Pink, our team, made it as overall winner. Pink was a lucky color for us, after all.

The Toyota Road Trek is a classic, well-planned and excellently executed annual event. But with the Rush experience and all, the Balesin Island edition was one-of-a-kind.