But parents don’t seem to know.

As a young dad many years ago, I relished having my two boys riding shotgun with me in the car. We would travel long distances, not just around the block, with one child in the back sleeping and another upfront pretending to drive. It was cute. But dangerous.

I recalled the many trips that I had with my own father driving in his Prince Datsun or his Toyota Corolla. I sat in front, unbuckled, window rolled down, and marveled at the insects stuck on the windshield or enjoying the wind, as we headed to Bulacan via the North Expressway or Calamba via the South Luzon Tollway.

I continued doing so until I realized the error of my ways.

So beginning with my third boy, sitting in the rear with a proper child seat became the norm. It was difficult in many ways because the child seat took so much space, and a compact sedan was a sardine can.

In two months, the implementation of Republic Act No. 11229 or the Child Safety in Motor Vehicles Act is going to start. How will it affect parents and those with children under their care? What kind of implementation will happen? And is the Land Transportation Office (LTO) ready to carry out the law. Where is the information campaign? Who else knows about the this most important (but rather discriminate and haphazard) piece of legislation.

The most important details of the law are: 1) use of child seats are mandatory for children 12 years old and below or less than 150 cms (about 4′ 11″) and 2) no child below the specified weight, height or age can sit in front of a vehicle. 3) Only children who are 13 years old with the compliant height can sit in front of the vehicle.

BUT WE WERE ALRIGHT

Yes, we were. I remember lying down on the rear parcel holder of my uncle’s Vauxhall to stare at the moon on the night drives.

My siblings and I would sit in the back of dad’s Escort Station wagon along with the cargo, and face South when the car was going North. Or my own kids would sit unbuckled in the rear of my SUV playing games and strumming the ukelele.

My cousins would arrive, all seven of them, alighting from a hatchback and be giggling and happy despite the crunch. Because of lack of seating the rear cargo space was filled with pillows and converted into a passenger nacelle.

Indeed many of us sat up front (or crouched in the cargo area of a hatchback) and we are all fine. That’s true.

A lot of things have changed since our days as kids.

Highway and road speeds increased. Cars became faster. The number of vehicles is higher now than in the last two decades combined. The density of traffic is quintupled. More drivers have developed attitudes to contend with. And a really bad licensing system has created a slew of really bad drivers.

What has really changed is both our awareness of and knowledge about road safety, safety devices in our cars, occupant safety in relation to vehicle crash dynamics.
Setting aside this knowledge will be foolhardy and even dangerous to our children. If we do not act on this knowledge, is like willfully putting our children at risk.
NO INFORMATION CAMPAIGN YET

I have not seen a massive public information campaign about the Child Safety Seat Law even since it was signed into law last 2019. Many motoring, parenting and safety websites and publications as well as newspapers that carried the story and an information campaign based on the law as had to be a wait until the Implementing Rules and Regulations (IRR) was completed.

Now that is complete, there is the process of publication, not tedious, but also not budgeted in the same way as a political campaign or a billboard for a politician is spent on. So expect that on February 2 there will be a lot of complaints, memes and anger over how the law is going to go into effect and how “we didn’t know” will trend.

Before the advent of most car manufacturers design cars with adults in mind. The first car recorded crash testing was done in 1934 by General Motors involving a car hitting a concrete barrier. In 1959 by Mercedes Benz also conducted more scientific tests with instrumentation. In both cases, it was to test the rigidity of their vehicles rather than the protection of passengers.

The first test crash dummy was invented in 1949 and called Sierra Sam. “He” was developed in order to study the impact of collisions and crashes on the body of the a human. Later developments in crash test dummies included the female anatomy, various body sizes, and in 1962, child crash test dummies which led to the invention of the child safety seats.

Car manufacturers typically design airbags to protect an adult. This is why the evolution of the use of the airbag started only with the driver. The passenger airbag was designed completely different, and so was the passenger airbag switch, which became a standard to vehicles where users would have a baby carrier in front.

If airbags were designed for those who are at least 5 feet tall and roughly 150 pounds, does age have anything to do with the advice of not having a child sit in the front passenger seat?

According to various studies conducted by the American National Highway Traffic Safety Administration (NHTSA) and the New Car Assessment Program (NCAP), even if a child is wearing a seat belt correctly when riding in the front seat, they’re more likely to sustain injuries from a passenger airbag than an adult. There was no indication of age, because children can be taller than 5 feet or heftier than 150 lbs even at 11 or 12 years old.

That is so that kids do not roam around the car when in motion. So the early seats were simply cages made of wood, metal pipe, or heavy gauge plastic. Many were adaptations of the lap belt, the 4-point harness, or oftentimes didn’t have any at all.

Some even included appendages such as steering wheels and play toys.

These seats proved to be ineffective both to restrain and protect the child as they were quite uncomfortable but also offered little or no protection in the case of a crash.

Here is a video of what happens to a non-compliant or improperly installed car seat.

HEIGHT AND WEIGHT NOT AGE

Working as a product planning manager at a Japanese car manufacturer educated me on the real reason why kids should not sit in front. Let’s take the process in sequence.

In a collision, an airbag deploys rapidly, within 1/20th of a second. That’s roughly 200 miles per hour. This delivers a significant amount of force to a younger, lighter child even if the child is within the specified height.

The reason is their own development. Children, even if they are as big as adults, based on height or weight still have their skeletal system developing. According to a study by the Canadian Pediatric Society, ‘seat belt syndrome’ can occur.

The study shows how children who are 12 years old or younger have undeveloped iliac crests. The iliac crest is a part of the body where arching bones sit on either side of the pelvis and look like wings–this is an “anatomical connection point” that keeps the seat belt properly positioned on the hips.

In children less than 13 years old these iliac crests are less developed than those of adults. According to the Canadian pediatric study, this can allow the seat belt to ride up over the abdomen, causing seat belt syndrome.

Children also do not have fully developed sternum. These breast bones also do not develop fully until the age of 13, which gives credence to the choice of the age in law. This anatomical / medical consideration is important for parents to understand, and to explain to children too. Without a mature skeletal system, a child sitting in front, despite being large for his/her age, is at increased risk of injury.

Conversely, parents who will allow children who sit in the front seat (in a provincial trip for example, hidden from the peering eyes of the law at the February 2 enforcement date) before they’re within the proper size or age put them at risk for head injuries due to the impact of the airbag on the head or body. In some cases, an airbag can lift untethered kids to hit the car roof or throw them into the side window.

WHY ARE THE REAR SEATS THE SAFEST?

The final argument is this.

Most collisions and crashes in the Philippines are frontal, based on combined DPWH and LTO data. The farther away one is from the crash zone, the safer it is. Not only because of distance but also because of the dissipation of the crash energy.

But if at 13, your child is taller than 150 cms and wants to sit with you in front, may I suggest the following actions: 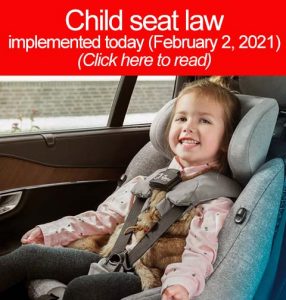 I am sure that the implementation of the Child Safety Seat Law, signed last February 2019 by the President is still undergoing the final deliberations of its implementing rules and regulations.

I have not heard of a single call for public consultation or a town hall to bring in parents and experts in the formulation of the IRR. Luckily, the road safety advocacy group ImagineLaw is very much involved. However without a public consultation how can we see the whole picture?

What about jeepneys, buses, the LRT, the PNR? All sorts of public transportation that may still put our children at risk. Will this law apply fully to the TNVS? What is the application to owner-type jeepneys, a lot of which do not even have proper rear sets. How about older cars and vintage vehicles?

Already training for fitters and enforcers is planned or has begun.

But what about training for parents and their children? What information campaign should have been done? Is there a plan from the DoTR and LTO? If there was a plan then it should be prepared now and come out at the time of the publication of the IRR and continue on until the date of implementation. That is a good two months or so. Should this not be the first program of action for the government? Has the pandemic been considered in this campaign?

Let me throw a wager and say that one day after the law will go into effect, some government official will call for its suspension because of “irregularities” or “inconsistencies” in the implementation. That is so very likely seeing the contents of the initial IRR and the timing from now until February 2 next year. COVID-19 is the main burden, but so is the safety of our children.

So many questions to ask. So little time to ask. In the meantime, child safety is compromised by the second.