THIS is a war against an unseen enemy but can decimate one-third of a continent’s population, just like what happened in Europe decades back, during the Black Plague and the misnamed Spanish influenza.

This is no ordinary war for the Filipino nation, and President Duterte, in his usual one-track mindfulness, deployed his military generals to lead the nation in this war. 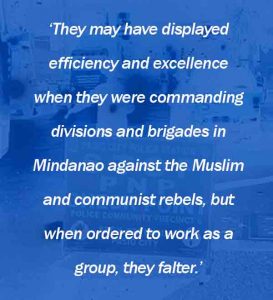 Thus, the front-line warriors in the fight against SARS nCov-2, the scientific name for the virus that causes the deadly respiratory disease COVID-19, are the following, all retired generals:  Delfin Lorenzana, Carlito Galvez, Eduardo Ano of DILG, Rolando Bautista of the DSWD and active generals Archie Gamboa of the PNP and Filemon Santos Jr. of the Armed Forces.

However strong Duterte’s trust in the managerial capabilities of these men, we notice that they find it very hard to work as a team.  They may have displayed efficiency and excellence when they were commanding divisions and brigades in Mindanao against the Muslim and communist rebels, but when ordered to work as a group, they falter.

And they falter while the nation is fighting its greatest war in 100 years, or perhaps in 500 years since the Battle of Mactan.

A case is in point is the ongoing finger-pointing on who is to blame for the delayed distribution of the Social Amelioration Program (SAP) for the poor — the DSWD of Bautista or the local government units supervised by Ano.  We think both departments are remiss, with Bautista, whom Ramon Tulfo called a “square peg in a round hole,” shouldering more of the blame.

While the DSWD does not have a reliable list of qualified beneficiaries, the DILG lacks a time-and-motion study on how the mayors can distribute the doleouts given that they also have to follow social distancing and other rigid protocols that they themselves imposed.

As of May 2, a total of 284 LGUs or 17.38 percent of the total 1,632 LGUs in the country already completed the distribution of SAP emergency subsidies. Many more towns and cities are distributing aid, availing themselves of the first extension of the deadline, with Quezon City Mayor Joy Belmonte requesting for a second extension.

The DSWD spokesperson has admitted that it has “limited capacity” to fully implement the emergency subsidy program, which prodded them to ask the assistance of the local officials, who then “politicized” the distribution process with favoritism and other misdeeds.

So much for the generals’ overrated efficiency in their work, Mr. President.