MALACANANG should be guided by New York Governor Cuomo lashing out against limited US lockdowns and citizens who favor them. He is aghast why many think the current restrictions ignored by several states seem worse than the coronavirus which spell almost certain death. “The ‘cure’ cannot be worse than the virus. The loss of jobs is nothing compared to death, being hungry at home equals death out in the streets, enduring domestic violence is better than potential death.” 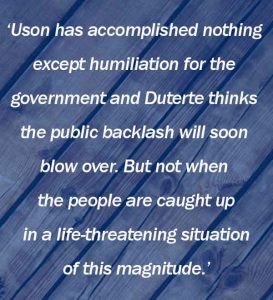 Here in our country, the impact of COVID-19 is obviously being simplified into a frenetic equation for expedience and economic revival. Buoyed by the rising number of patient recoveries but unmindful of the troubling uncertainties of treatment and management the government is losing sight of the huge odds from the still uncontrolled health crisis. And yet, across the Pacific and in Europe infection spikes have continued due to the lifting or easing of lockdowns.

UP Political Professor Clarita Carlos questions why three military generals comprise the troika of the IATF echoing a constant public rebuke against militarization. With little doubt it patently reflects President Duterte’s tired devotion to his doomed instincts for national governance.

Armchair generals in this season of galloping virus from hell should give way to living medical icons such as Jaime Galvez Tan and Juan Leachon. On Twitter, Sen. Ping Lacson warns of a doomsday scenario if DOH Secretary Francisco Duque is not removed. “With less than 100,000 tests so far conducted and quite a number of RT-PCR tests not yet run but just stored, we may outdo the Spanish flu of 1918 that lasted 36 months and with up to 50 million deaths. Filipinos don’t deserve to be the last race dying. DOH needs a leader who can lead.”

There will be more defiance against quarantine restrictions for as long as Mocha Uson remains “at large.” Demoralized law enforcers and barangay officials will become more provoked and intolerant of violators, the latter turning more restive and agitated as they picture her as the “demonic untouchable.”

Uson has accomplished nothing except humiliation for the government and Duterte thinks the public backlash will soon blow over. But not when the people are caught up in a life-threatening situation of this magnitude. He should no longer expect the fatigued police and military to be up on their feet. Worst is that Uson has demeaned the sacrificial toil of frontliners as death threatens to overtakes them.

The PNP finds a fresh opportunity to redeem itself from the ravages of the brutal drug war. Suddenly, it has found itself clearly on the side of the people fighting against an unseen and deadly enemy. Still undermanned and assigned at distant areas many could not go back to their homes, a tiny price to pay for the more than 10,000 families permanently estranged from their loved ones after they were gunned down in the heat of drug “shootouts.” The truly kind-hearted would assist and feed forlorn and confused quarantine violators. We are sure there are more unrecorded or unreported acts of humanity from the PNP today.

Concluding statement from Ugandan President Kaguta Museveni: “Thankfully, this army has a weakness and it can be defeated. It only requires our collective action, discipline and forbearance. COVID-19 cannot survive social and physical distancing. It only thrives when you confront it. It loves to be confronted. It capitulates in the face of collective social and physical distancing. It bows before good personal hygiene. It is helpless when you take your destiny in your own hands by keeping them sanitized as often as possible. This is not a time to cry about bread and butter like spoiled children. After all, the Holy Book tells us that man shall not live by bread alone. Let’s obey and follow the instructions of the authorities. Let’s flatten the COVID-19 curve. Let’s exercise patience. Let’s be our brothers’ keeper. In no time, we shall regain our freedom, enterprise and socializing.