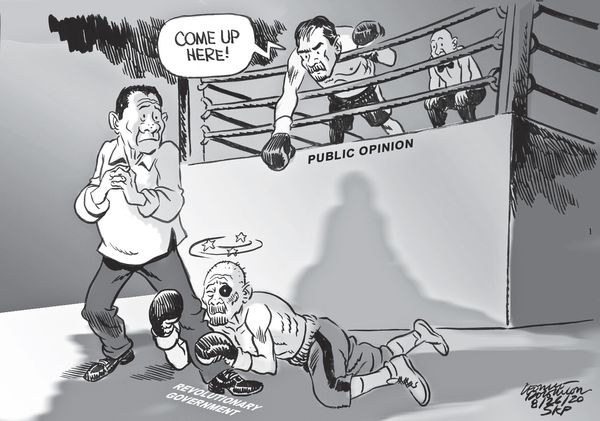 PRESIDENT Duterte alone and no one else can say it in the most convincing fashion, not spox Harry Roque or Senator Go — this thing about his state of health.

Yesterday, the President admitted to the nation in a televised address from Davao City that his doctors have warned him that his Barrett’s esophagus is “nearing Stage 1 cancer.”

Duterte said he had been advised to stop drinking alcohol (he is back to drinking brandy) to avoid worsening his ailment.

The Chief Executive’s having the disease Barrett’s esophagus is nothing new. He had admitted suffering from it months ago, and clarified that it was due to his alcohol intake. Barrett’s esophagus is a complication of gastroesophageal reflux disease (GERD) in which the stomach regurgitates its contents into the esophagus and consequently erodes the esophagus. The US-based John Hopkins Medicine Institute website says the condition can sometimes develop into esophageal cancer, exactly what Duterte’s physicians had warned him about.

It may be recalled that in 2018, the President said his cancer tests came back negative but he admitted that he suffered from a bad case of Barrett’s esophagus ailment following a medical checkup.

His favorite drink, brandy, is too good to resist for this President who’s a workaholic and likes to stay late at night, pouring over documents. Also last year, Duterte said his doctor takes his blood “almost every other day” due to his Buerger’s disease, an inflamed condition of the blood vessels. He is also in “perpetual pain” due to a spinal injury from a motorcycle accident years ago. This, of course, is light-years different from the vague “perpetual isolation” that spokesman Harry Roque spoke about, further obscuring the narrative.

Those of us who have entertained doubts and questions about Duterte’s health should find clear and pellucid explanations direct from the President’s mouth. It is no longer important if he sought medical treatment for his diseases here or abroad, for that is a given thing for patients — ordinary or not — but more so of presidential patients.

President Duterte’s open confession about his current state of health is better than a medical certificate signed by a doctor, for it emanates from the heart and comes with the fatalistic admission that he is an old man of 75 years, one who has served this government and this nation for so many years in various capacities, and was willing to relinquish power to whoever is duly elected to replace him in 2022.

One highlight of the President’s announcement is his belief that he is nearing retirement or even death, and old people like him are more concerned about health rather than wealth, during these few years or months that they still have. This should temporarily muffle the noise created by his regular nitpickers like Antonio Trillanes IV.