WE’RE nearly two months into the enhanced community quarantine (ECQ) over Luzon, and with any luck, we’ll be downgraded to general community quarantine (GCQ) after May 15th. Which I find relieving, as it means we’ll never have to experience being under Maximum Plus Ultra Extreme Overdrive Expanded Fortified Grade-A Satisfaction Guaranteed Enhanced Community Quarantine with Zinc. But as we prepare to enter a stage in this SARS-CoV-2 pandemic where we might begin to return to some level of normalcy, I have to ask: what can we expect? 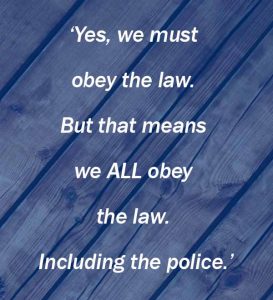 For one, we can expect more people outside their homes. The IATF Resolution No. 29 – much-ballyhooed but seemingly not published anywhere as of this writing – shows us what businesses and industries may resume operations under a GCQ. I’m sure the first thing some of us will do once GCQ is on is to proceed to buy a new set of clothes, because holy geez all that weight we’ve gained. Or lost, depending on your level of self-discipline when it comes to food, of which I have close to zero.

But with more people outside, we’ll get more people exposed to our law enforcement agencies. And let’s face it, these past few weeks have not been a positive showing for our police.

I’m sure that the Duterte Death Squad (DDS) trolls love what they’ve been seeing in the news. Police entering private property and shouting at condominium residents, or arresting a belligerent resident foreigner on private property, or shooting and killing unarmed retired army corporals in broad daylight, or helping a poor injured POGO worker who literally resisted arrest and tried to make a run for it. DDS eye-candy galore. All in the name of law and order. Or was it in Duterte’s name? I can’t keep track anymore. All I know is that it isn’t in MY name the police are doing any of that.

All of this plays heavily into the “Pasaway ang mga Filipino” narrative, which then lets DDS trolls go on to call on everyone to “Obey the law!”

It’s easy to shout “Obey the law!” in a “Pasaway kasi ang mga Filipino” narrative. Because they’re both truisms. Yes, law-abiding citizens should, in fact, obey the law. Yes, there will always be Filipinos who are “pasaway” in some shape or form. But magically, the law doesn’t seem to apply to that POGO worker who resisted arrest. Or to OWWA Deputy Director Mocha Uson, who recently attended a mass gathering for FAPS Int’l.

(Aside: No, I didn’t invent that acronym. Yes, you may continue laughing. No, please don’t spew coffee onto your device, that is a pain to clean up.)

In fact, the law doesn’t even seem to apply to the police themselves, whose recent infamous actions have consistently violated their own Manual of Operational Procedure, not to mention Criminal Procedure under the Rules of Court and the Bill of Rights under our Constitution. Use of weapons and lethal force? Restrictions ignored. Maximum tolerance? Try minimum to none. Miranda rights? Never heard of them. Warrantless arrests? Presently the rule, not the exception. Charging people with an actual crime? To borrow the phrase of one of the police involved in the killing of Corporal Winston Ragos, “Mamaya malalaman mo problema mo.”

Yes, we must obey the law. Moreso the police. The whole point of why we hold police to a higher standard of conduct is that they can legally carry firearms, and only in specific instances may arrest individuals without warrant. The ability of ordinary citizens to do either, much less both, is severely limited.

We cannot insist, as the DDS do, that ordinary citizens exercise more stringent observance of the law than those mandated to enforce the law. “’Pasaway ang mga Filipino,’ kaya ‘Obey the law!’” cannot mean that we give the police a free pass to do whatever they or the DDS want, in violation of the very law they are supposed to uphold and enforce. It is simply a contradiction of ideas that makes no rational sense.