DURING one of several distributions of cash assistance by the City of Manila to its residents, represented at City Hall by the barangay chairmen and treasurers, Mayor Francisco “Isko Moreno” Domagoso said he is counting on the village officials in the city’s almost 900 barangays to be the face/presence of City Hall in their areas. 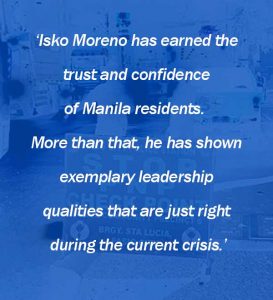 Mayor Isko also stressed to the barangay heads that the current COVID-19 public health emergency is a crisis that occurs once in a lifetime (the last pandemic of this magnitude was the Spanish flu of 1919).

This pandemic, Mayor Isko continued, provides a perfect opportunity for the barangay leaders to “shine,” saying that the present crisis is nothing short of a “shining moment” for them if they are just serious and honest in the performance of their jobs.

Mayor Isko is himself seizing this “shining moment” as we all can see, with the way he performs his avowed duty as father of the city.

Moreno is the first among Metro Manila mayors to come to the aid of his poor constituents, with food packs, rice, and canned goods.  Unmindful of risks to his personal health, Mayor Isko himself goes around in Parola, Baseco, Smokey Mountain, and other depressed areas in Tondo to distribute the food packs and cash assistance.

Mayor Moreno also is proactive and aggressive in the daunting task of protecting Manila’s geographical territory from any danger of COVID-19 contamination.

This was most apparent when he himself went to a barangay in Caloocan City looking for its chairman and barangay kagawads who were identified as sponsors of a “tupada” (illegal cockfighting) inside the Manila North Cemetery which is near Caloocan.

The “tupada” gamblers not only violated the enhanced community quarantine prohibition against gathering in a crowd, but also the anti-gambling law, among others.  Throwing all caution to the wind, Mayor Isko Moreno did not think twice that he might be exposing himself to harm when he confronted residents of the Caloocan barangay asking them to surrender their barangay chief.  The next day, the culprits surrendered to the Caloocan City mayor, and were later turned over to the Manila Police.

Isko Moreno has earned the trust and confidence of Manila residents.  More than that, he has shown exemplary leadership qualities that are just right during the current crisis.

Thus, almost everyone in Sampaloc, Manila are supportive of Moreno’s order to put the district under “hard lockdown” for 48 hours starting today, April 23, at 8 p.m.  With the Manila Police, the NCRPO and the Armed Forces and its 150 soldiers all helping each other in enforcing the lockdown, this looks like a mini-martial law but nobody in Sampaloc is complaining.  After all, Sampaloc notched the highest COVID-19 score of 106 confirmed cases.  Also, the Ospital ng Sampaloc suffered infections among some of its staff, and was briefly closed for disinfection.

With Isko Moreno at the helm, the people of the City of Manila are in good hands.