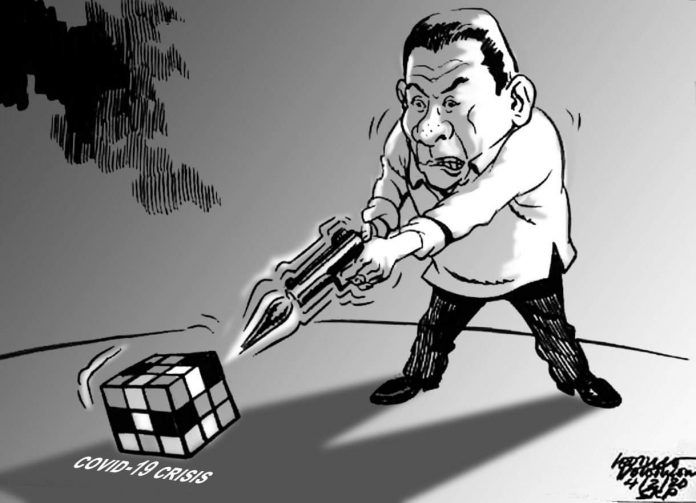 THE Philippine National Police (PNP) is in a very precarious position as it struggles to strike a balance between President Duterte’s April 1 order to “shoot them dead” the troublemakers in the streets and the Constitution which guarantees human rights of the citizens.

General Archie Gamboa, PNP chief, was asked by reporters if the police force would implement Duterte’s order. He replied: “Of course not, probably the President just overemphasized on implementing the law in this time of crisis.”

Gamboa said they took note of the strong message from the President, and “I think all the PNP personnel understood it.”

The Chief Executive’s order for law enforcers — not just the police but including the Armed Forces of the Philippines — to arrest and shoot troublemakers who resort to violence either during distribution of relief goods or at any time during the enhanced community quarantine, was triggered by the Kadamay-led protest rally on EDSA last Wednesday.

Here’s the official report of the Quezon City government.

In that mass mobilization, the notoriously devious Kadamay urban poor organization which led the takeover of public housing units in Bulacan a few years ago, allegedly fooled the residents of Barangay San Roque in Quezon City, telling them the night before to assemble at EDSA the next morning for there will be distribution of relief packs and cash assistance. The poor residents did not know that it was a protest rally, and Kadamay activists were using them as cannon fodder.

Social issues such as lack of food and jobs are legitimate concerns but these should not be used by the Left in trying to undermine government efforts at alleviating the hardship of the masses and trying to contain the spread of the COVID-19 pandemic.

Duterte, of course, retaliated with arrests and threats against people whose objectives might not be just to air their legitimate grievances but to sow trouble and worse, bring down his government.

The PNP chief assured the public that the police force will “always exercise maximum tolerance and within the bounds of the law” but maximum tolerance has its limits, and the Kadamay supporters have been duly warned.

‘MARKETS ARE NOT BUYING IT’: CBs say no plans to raise...