BOTH the Inter-Agency Task Force for Emerging Infectious Disease (IATF-EID) and the presidential spokesman have announced that President Duterte will be meeting with the task force members, medical and economic experts on the issue of lifting the Luzon-wide enhanced community quarantine (ECQ).

Actually, the enhanced community quarantine is the Department of Health’s tepid attempt at euphemism.  The government could have termed it lockdown because that is what it is — and now even Duterte, in his first speech announcing the ECQ, referred to it as “lockdown.” 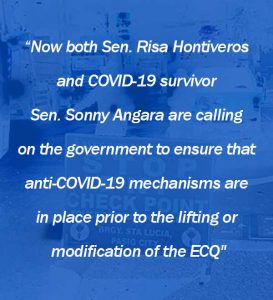 Well, whatever name you want to call it, what happened is that we have shooed away people in the streets, or at least the most cooperative ones.  Blumentritt, Tondo, Balintawak, Parola, Baseco, Alabang-Zapote Road, Commonwealth Ave., and other places where population density is high just cannot be swayed or requested to follow.

With the way some Metro Manila residents behave (barangay-type tupadas or cockfighting, gambling, amateur boxing, drinking sessions, birthday parties, Holy Week processions even if motorized, etc.), it is understandable that the ECQ did not flatten the curve as originally intended.

Now both Sen. Risa Hontiveros and COVID-19 survivor Sen. Sonny Angara are calling the government to ensure that anti-COVID-19 mechanisms are in place prior to the lifting or modification of the ECQ.

Hontiveros said the DOH should double its efforts to conduct mass testing of Filipinos before lifting or modifying the ECQ is considered.  But even the lady senator knows that it is impossible to test all Filipinos, and considering that rapid testing can identify only antibodies against the virus and needed confirmatory test from RT-PCR tests done by the RITM, the whole idea of mass testing has become untenable.

Angara has just a small request.  He said the government needs to keep the public well-informed regarding any changes or modification of the ECQ especially before the April 30. Angara said any decision to be made by the government cannot come as a surprise to a population of 108 million.

He said the government should be prepared to do things gradually to prevent any large scale outbreaks and allow certain more essential services and industries to operate.

The success of lifting or easing the ECQ restrictions, it has now become apparent, depends on full preparation by the concerned government agencies in charge.