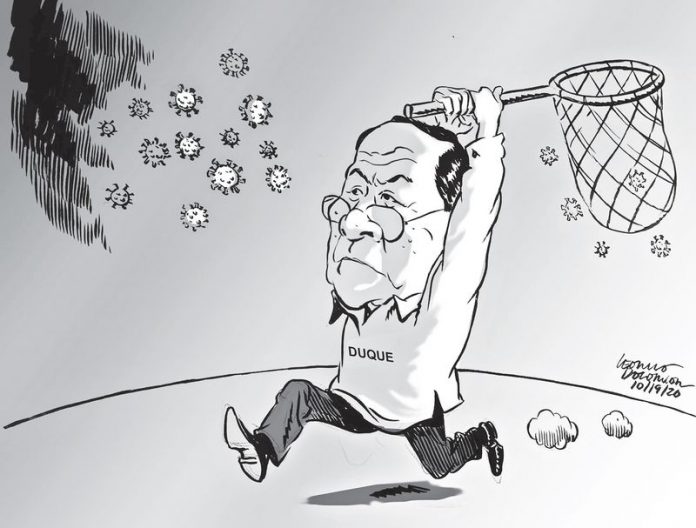 PRESIDENTIAL spokesman Harry Roque last week requested the OCTA Research team, a private group composed primarily of faculty members and alumni of the University of the Philippines and the University of Santo Tomas, not to make public their recommendations and instead send them directly to the government panel having a pompous name and even more pompous composition — the Inter-Agency Task Force (IATF) for the Management of Emerging Infectious Diseases. With the number of military, police and ex-military officials in this task force, one might mistake this to be a unit of the Armed Forces of the Philippines.

You see, the OCTA Research Group has been regularly issuing reports on the COVID-19 situation nationwide, based on their own scientific data. And the last report that they released is that there has been a surge in COVID-19 cases in Bauan in Batangas, Calbayog in Western Samar, and General Trias in Cavite, and that they recommend that the government implement stricter lockdown measures in these places.

‘Is it now government policy to censor important scientific findings that directly affect the lives of the people?’

Spox Roque is displeased with this development, and pointed out that OCTA “does not have the same number of experts working with the Inter-agency Task Force on Emerging Infectious Diseases (IATF-EID).” Roque’s flawed argument is that because the IATF has many so-called experts, they can do better than the academics. Both groups claim that they adhere to the tried and tested principles of science, medicine, math, and statistics in their respective work.

Vice President Leonor Robredo disagreed with the presidential spokesperson, though. She said the Duterte administration wants OCTA Research Group to stop publicizing their recommendations on the pandemic response because of its intention not to follow them.

“The only reason I see why it must be hidden is that they won’t follow the data, they would decide not based on data,” she said.

According to Robredo, it would be better for experts from the group to make public their research instead of just communicating it to the government in private. Such is the nature of any scientific data; it should be presented to the public and to the scientific community for scrutiny and validation. That is how the scientific method works.

On another issue, Undersecretary Benny Antiporda of the Department of Environment and Natural Resources (DENR) said he welcomed collaboration with the University of the Philippines Marine Science Institute (UPMSI) in rehabilitating Manila Bay if it is free. Antiporda mentioned that hundreds of millions of pesos are being spent by the DENR for UPMSI studies about Manila Bay, and came up only with criticisms about the white dolomite sand project. The UP marine scientists have proposed the planting of mangrove instead in the area. It was later explained by the UPMSI that “the cost of scientific research and investigation, from the use of laboratories and research equipment and facilities, to support for research assistants, should be, as they actually are shouldered by the clients, as the UPMSI is not a line agency in the government’s executive branch.”

After this clarification, Antiporda did a Roque and requested the UP marine scientists not to publicize to the public their recommendations and instead submit them directly to the DENR.

This leads us to ponder on the question: Is it now government policy to censor important scientific findings that directly affect the lives of the people?

Roque, Antiporda, and perhaps PCOO Secretary Martin Andanar should be called to provide the explanation if this is such a new policy of the Duterte administration, for it goes against the concepts of freedom of information and transparency in governance.

China shifts away from 5-year targets