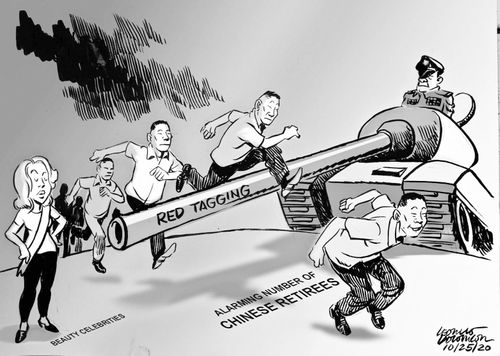 LIEUTENANT General Antonio Parlade Jr., national spokesman of the National Task Force to End Local Communist Armed Conflict (NTF-ELCAC), a panel that is headed by President Rodrigo Duterte himself, is popular within his military circle but is not quite known to the public.

Not until he issued statements that somehow criticize a Hope Elizabeth Soberano and chided her for participating in a Gabriela Women›s Party youth forum, while at the same time expressing support for her pivot to being heard on some intellectual concerns.

«Let us not red-tag Liza Soberano. It›s not fair to her. She is merely supporting advocacy for women›s rights. She has to be protected in the exercise of her rights,» said Parlade in a post on the Facebook page of the NTF-ELCAC. He concluded this, saying, «Is she an NPA [New People›s Army]? No, of course not. Not yet.»

‘The issue of red-tagging… surfaced lately because the real groups which sympathize with the New People›s Army and the CPP have ramped up their propaganda against President Duterte and his policies.’

General Parlade has been issuing warnings that Gabriela›s youth arm, the Malayang Kilusan ng Bagong Kababaihan (MAKIBAKA), is targeting celebrities to be recruited in their group. He said, «Liza Soberano, there›s still a chance to abdicate that group. If you don›t, you will suffer the same fate as Josephine Anne Lapira alias Ella.»

Parlade referred to the deceased Lapira, a former deputy secretary general of Gabriela Youth of the University of the Philippines Manila and defender of women›s rights, who allegedly joined the NPA. She was among 14 communist rebels killed in an armed encounter in Nasugbu, Batangas in November, 2017.

«It›s a pity she learned about nonsense things like nabbing a firearm and exploitation while already inside the underground. It was too late, she is dead,» Parlade said.

The issue of red-tagging — accusing one of being a supporter or member of the Communist Party of the Philippines (CPP) thru its front organizations — has surfaced lately because the real groups which sympathize with the New People›s Army and the CPP have ramped up their propaganda against President Duterte and his policies.

Is Parlade guilty of red-tagging? Or PCOO Undersecretary Lorraine Badoy similarly guilty as the «Makabayan» bloc in the House of Representatives has claimed, thereby jeopardizing the proposed budget of Martin Andanar›s President Communications Operations Office? Renowned columnist Rigoberto Tiglao, who had been inside the CPP national leadership and so he knows whereof he speaks, wrote that red-tagging is no big deal now because Joma Sison — due to his huge ego trip — has red-tagged all these personalities and organizations when he listed them as members of the International League of People›s Struggles (ILPS).

Sen. Risa Hontiveros, in riding on the Parlade-Soberano issue, revealed her real arrogant character when she threatened Parlade that she will give him hell when he appears again at the Commission on Appointments for confirmation to the next highest rank. General Parlade told the senator that he does not aspire to be AFP chief of staff, and that should douse cold water to her pretty, haughty face.

The issue of red-tagging will be in our social discourse now and in the near future, and is a concern of national importance that merits serious study.