IT is interesting and sometimes funny how the ongoing war against the deadly SARS-CoV-2– the scientific name of the coronavirus that causes the disease COVID-19–has unveiled certain weaknesses in character of our national leaders.

Sen. Aquilino “Koko” Pimentel III was the first to fall with his folly, his unceremonious visit to the Makati Medical Center with his pregnant wife Kathryna in tow, on March 24.

That visit was against health and quarantine protocols, because Pimentel knew that he was a person under investigation at that time, having had a test and waiting only for the results from the laboratory.

According to the senator, the Research Institute for Tropical Medicine (RITM) called him at 9 p.m. of the same day, to inform him that he is COVID-19 positive.  Pimentel was already inside the hospital when he got the information.  He immediately informed the OB-gyne doctor of his wife about the result and then left the hospital premises.

This incident caused a deluge of criticisms on social media and other platforms against Pimentel, leading to criminal and administrative charges filed against him by the National Bureau of Investigation, on the initiative of a lawyer who used to be associated with former Vice President Jejomar Binay. 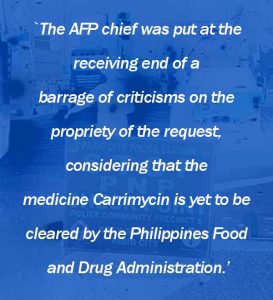 Another funny incident is somewhat recent — the case of Gen. Felimon Santos Jr., chief of staff of the Armed Forces of the Philippines, who wrote a letter to Chinese Ambassador Huang Xilian to request for the purchase of medicine which he said had helped him recover from COVID-19. Santos tested positive for the coronavirus on March 27 but recovered quickly.

In his letter, Santos requested for assistance from the ambassador to buy five boxes of Carrimycin tablets since the medicine is only available in China. He said he will give it to his friends who are suffering from the disease.

Santos’s letter was apparently leaked and went viral on the internet.  The AFP chief of staff was put at the receiving end of a barrage of criticisms on the propriety of the request, considering that the medicine

Carrimycin has yet to be cleared by the Philippines Food and Drug Administration (FDA).

The letter was signed by Santos but had no date, and was quickly withdrawn by the top military officer, who later admitted to Defense Secretary Delfin Lorenzana that the letter was authentic.

“General Santos withdrew his request upon learning that our FDA has not approved the drug for use in the Philippines,” Lorenzana explained.

Lorenzana said this should put closure to the issue, but we think otherwise.

If Carrimycin is indeed a potent medicine for COVID-19, then Santos did the nation and the world a favor by asking the ambassador for it.

For sure, US President Donald Trump would want to look into it, for he had even pleaded to India to find such a cure for the disease.  Trump had also touted the use of hydroxychloroquine — a drug for malaria– and if all others failed, Lysol and any bleach could be ingested, he said. Nobody believed him, of course, for this is tantamount to suicide.

Carrimycin or any medicine for COVID-19, if found, should be shared with everybody in the world, and not just for the friends of the AFP chief of staff.